How late ace comedian, Baba Sala would be remembered 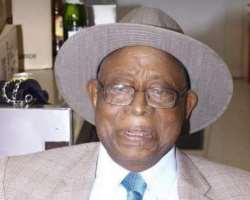 In this piece by Olawale Adewale on the demise of the late ace comedian, Pa Moses Olaiya Adejumo, popularly known as Lamidi Baba Sala, his children, neighbours, church members and actors expressed grieve as they speak on how they would miss him.

He was also an entrepreneur, with significant investments in entertainment, hotels and recreation. He would forever be remembered for his creativity, dramatic simplicity, far-reaching and rib-cracking humour. His humour was clean, elevating, uplifting, philosophical and borne out of wisdom. One can hardly watch Baba Sala without laughing and getting highly elated. He was a harbinger of good fortune: He made people forget their sorrows through his talent.

Some of his works include Mosebolatan in 1985, Aare Agbaye in 1983, Orun Mooru in 1982, Obee Gbona in 1989, Diamond in 1990 and Agba Man in 1992. In fact, anyone that grew up in the South-West part of Nigeria would attest to the prowess and productivity of pa Adejumo either by having watched some of his various television series or probably the celluloid at the cinema then. For more than 50 years, his comedy was the delight of every home.

Sadly, the Adejumo Abogunloko family of Ijoka in Ilesa, Osun State, the people of Osun State and perhaps the entire country mourned the death of Baba Sala who died in the evening last Sunday. Mourners besieged his residence located at Kajola Street, behind technical College, Ilesa to express their sympathy. His corpse was taken to morgue of Wesley Guild Hospital in Ilesa and a condolence register was opened at the house immediately. His death certainly has left a gap too huge to be covered in the immediate subsequent years without him.

During his lifetime, the late comedian was a minister of God at Cherubim and Seraphim Church, Idasa number one model parish in Ilesa and he was a recipient of Member of Order of Nigeria (MON) national honour. The popular Juju musician, Sunday Adegeye also known as King Sunny Ade (KSA) learnt how to play guitar from late Baba Sala. Baba Sala who was born in 1936 died at the age of 82. He was survived by wives, children, grand children and great grand children.

The Secretary of late Adejumo’s church, Mrs Monisola Akande also described Baba Sala as a nice man and lamented that his death was very painful. She said “Baba was an icon, a loving and very kind man. He was the spiritual Moses of our time. We are pained about his death. He served God with his life and he was an exemplary man. Baba was a prayerful man when he was alive even at old age, he was a prayer warrior. We don’t want him to go but death took him from us.”

Also, one of his church members, Mr Adeniyi Gegede said the death of late Adejumo left a vacuum in the church and the community. “He had a free mind. He left a vacuum that would be hard to fill. Baba believed in God and he served Him diligently. We shall miss his prayers. He was a good example for us. He was a great minister of God. We really loved him. But when it is time for him to go and meet his Lord, there is nothing we can do.”

Speaking on the death of his father, Adebisi Adejumo said the entire family felt bad about the death of late Adejumo and that they are grieving, she however expressed delighted that her late dad was loved by many people for what he was known for during his lifetime. “My dad helped many people to stay alive when they would have wanted their world to just come to an end. As a comedian, he used his talent to make people happy and forget their sorrow. He was a good father. Anywhere we go, people tell us that our father was loved and that makes us very happy.”

Baba Sala’s son who is also a comedian and performing officer in the National Troup of Nigeria, Mr Emanuel Adejumo, popularly known as Boy Sala also said he would miss his dad for his prayers. “Whenever I go to him, dad will start praying. I will miss him for the prayers”, Emmanuel said.

Speaking on the death of Baba Sala in a chat with our correspondent, the popular actor, Alhaji Kareem Adepoju also known as Baba Wande said late Moses Olaiya lived fulfilled life. "Baba Sala was a fulfilled man. He lived a good life. He was successful and we cannot forget him. Nigerians would not forget him. I worked with him during his lifetime. I featured in his film, Mosebolatan in which I played major roles. We will surely miss him", Baba Wande said.

Another popular actor, Prince Jide Kosoko lamented that the death of Baba Sala was unfortunate and that the ace comedian would be missed for his hospitable and accommodating trait. Kosoko said “Baba Sala accommodated the young and the old, the male and the female. He groomed many artists in the entertainment industry. Baba Sala’s efforts in grooming the Nigerian comedy industry would not be forgotten in a hurry and he would be missed”.

While mourning Baba Sala, Osun State Governor, Mr Rauf Aregbesola lamented that the death of the late comedian was a great lost which ends an era of flowing and successful theatre career. In a statement by Aregbesola's Media Adviser, Mr. Sola Fasure, the Governor said the death of the comedy legend would create a huge hiatus in the thespian trade in Nigeria. Aregbesola noted that Moses Olaiya was unarguably the greatest comedian.

The Governor said "I received the news of the death of Pa Moses Olaiya aka Baba Sala, with a deep and irreplaceable sense of loss. He has been in our prayers since he battled with ailments arising from old age for some time now. His death is significant in here in that he has gone to rest with his Lord permanently. Nevertheless, his exit signified an end to his own brand of comedy, which no one can rival or beat. His death has therefore left a yawning gap in the theatre arena in the country. Pa Moses Olaiya Adejumo was undoubtedly a theatre veteran, a comedian par excellence and a humour merchant of no mean feat.

"On behalf of myself, the government and people of Osun, I send our heartfelt condolences to the immediate and extended family of the late dramatist, the paramount ruler of Ìjẹ̀sà Land, His Royal Majesty, Oba Dr. Gabriel Adekunle Aromolaran, and the association of theatre practitioners in the country. We pray that his gentle soul finds solace in and rest eternal with his Lord”, the Governor said.