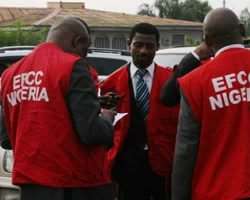 It named one Abba Ali Yahaya as the brain behind the deal.

Apart from impounding his passport, about €112,000 undeclared by Abba, has also been forfeited over alleged violation of the nation's Money Laundering (Prohibition) Act.

The precious metal was handed over to the suspect by a syndicate of illegal miners operating in Zamfara State.

The anti-graft agency is already on the trail of four members of the said syndicate said to have perfected ways of beating security agencies at the nation's airports.

According to a document sighted by our correspondent, the suspect, who admitted to be a courier, was arrested at the Nnamdi Azikiwe International Airport by EFCC operatives led by a crack female detective.

It was gathered that the suspect had escaped being caught by all the screening machines at the airport.

The fact-sheet indicated that “the suspect was caught following a tip-off after he had managed to pass through all the screening machines without being caught.

“He was in possession of N1.1b worth of gold while travelling alone to meet with the Dubai end of a ring of buyers of illegal miners. Being illegally in possession of the gold was a violation of Minerals and Mines Act.

“Abba had €112, 000 on him which he hid from Customs and he was caught with 19 ATM cards. Upon interrogation, he admitted he is a courier and he fingered a businessman. Our detectives later discovered that the suspect only implicated the businessman as a decoy.

“The EFCC is already on the trail of four suspects connected with massive illegal mining activities in Zamfara and exportation of mines. Preliminary evidence has linked the suspect with a miner in Zamfara.

“We have confiscated the passport of the suspect, seized the gold and the €112,000 he strapped into his body will be 100 per cent automatically forfeited to the Federal Government as contained in the Money Laundering (Prohibition) Act.

“The EFCC will file an application before a Federal High Court for the forfeiture of the undeclared cash. The suspect is empowered by law to travel with about $10,000.

“So far, Abba has been released on bail pending the conclusion of investigation.”

As at press time, it was gathered that a probe of how the suspect scaled through the scanning points without being detected was ongoing.

A government source added: “It was embarrassing that we have many screening and scanning machines being managed by different security agencies but they were unable to detect the suspect.

“We are suspecting connivance with the suspect by some of the officials at different points. It is likely that the syndicate sending the suspect to Dubai might have penetrated the security operations at the airport.

“At the end of our discreet investigation, we will be able to find out how he beat the security network at the airport.