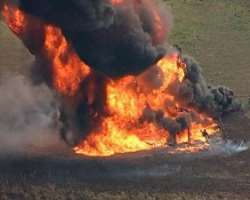 At least 50 people have been confirmed killed in the petroleum pipeline accident at Umuaduru and Umuimo in Osisioma Ngwa Local Council of Abia State in southeastern Nigeria, an official said late Saturday, raising the possibility that the death toll might rise.

“At the moment, we have 50 casualties but we will have a comprehensive report on Monday when we go to all the hospitals,” Evans Ugoh, southeast regional head of the National Emergency Management Agency, told Anadolu Agency.

Ugoh said the explosion occurred in the early hours of Saturday when people were scooping fuel from a damaged pipeline through which the state-owned oil corporation ferries refined crude oil to its depot in Enugu, the capital city of Enugu state.

“The pipeline caught fire when they were scooping fuel, resulting in a huge explosion. A whole building was razed in the inferno while dozens of people were injured,” he said.

The governor immediately directed the state Petroleum Resources Commissioner, Mr. Chizurum Kanu to constitute a Commission of Inquiry to unravel the remote and immediate causes of the incident.

He described the incident as “unfortunate and disheartening,” while commiserating with the families and relations of the victims.