Army Partners With Un To Promote Humanitarian Affairs During Insurgency 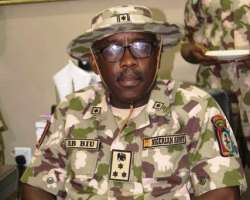 The Nigerian Army has resolved to partner with the United Nations Office for the Coordination Humanitarian Affairs ( UN-OCHA) to develop capacity that will enhance their professionalism in promoting humanitarian principles and conduct during insurgency.

A statement issued by Brigadier General Texas Chukwu, the Director, Army Public Relations Sunday said that the GOC added that the workshop was apt, interactive and instructive for all the participants, urging them not to relent to train and be resourceful force multipliers by imparting on their troops with the knowledge acquired from the workshop.

Brigadier General Biu commended UN-OCHA and its partners for collaborating with the Army and facilitating the attendance of resource persons from abroad for the workshop. He also assured them of a harmonious partnership with the the Nigerian Army towards enhancing sustainable capacity development programmes in the theatre.

In his response, the Deputy Head of OCHA, Crispen Rukasha, expressed appreciation to the Acting GOC for attending the closing ceremony of the workshop.

He also thanked the Nigerian Army for partnering with OCHA towards the successful conduct of the UN – Military Coordination Workshop in Maiduguri.