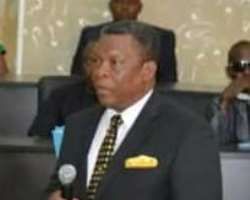 For failing to deploy health personnel to the Sickle Cell Clinic built by 05 Initiative, the pet project of the Delta State governor’s wife, Dame Edith Okowa, at the Kwale central hospital, members of the Guild of Editors have called for the speedy displacement of the state Health Commissioner, Dr. Mordi Ononye.

The guild of editors who held their 14th All Nigeria Editors’ Conference in Asaba, in the last four days with the theme: “Credible Elections, Sustainable Democracy and the Nigeria Media”, were on tour of the state government’s projects on Saturday, got miffed at their arrival to the Kwale general hospital after about an hour drive from Igbuzor, with no person on ground to conduct them round the Sickle Cell Clinic.

According to them, the absence of the personnel in charge was tantamount to discrediting the governor and making him look unserious in the eyes of the gatekeepers who were on the spot assessment of the governor’s achievements in the last three years.

Speaking to journalists at the hospital, Salami Samiu, Publisher/Editor-In-Chief, Newsmailng, an online platform, expressed displeasure over the attitude of the health Commissioner and the supposed health personnel who were not on ground.

Samiu said, “I feel extremely disappointed” even as others who also expressed their disapproval, regretted the untidiness of the hospital environment coupled with power failure just as they noted that a health facility like Kwale general hospital could be run with a generating set.

At the Delta Agricultural and Rural Development Authority (DARDA), Igbuzor, a farm cluster with 27 males and females, the Farm Manager, Mrs Felicia Aghwadoma, who conducted the editors round the farm briefed them that the farm started since 26th of July 2018 and is being managed by the Youth Agricultural Entrepreneurship Programme (YAGEP).

The former Assistant Director news, Radio Nigeria, who is into consultancy, Mr Mike Onochie, said, “it is an impressive performance by what I have seen. More especially as it gives jobs to the youths and they are also trained, if these youths continue, if they pay good attention to this business, they are not going to beg for bread anymore. They should be able to take care of themselves and their families and so the job market will be reduced. It is a very impressive thing that the Delta State government has done”, the retired Director reiterated.

Engr. Oputa Victor, a Deputy Director in charge of Urban and Rural roads, north who represented the state Works Commissioner, James Augoye, moved the editors to the completed 24.5 rehabilitation/asphalt overlay of Nsukwa-Ejeme-Aniogor/Awa-Alindima road which cut across three council areas of Aniocha South, Ndokwa West and Ika North East awarded in 2017, which include regulation of potholes, reconstruction of the failed portions of the road and an overlay of one layer of asphalt.

“If this kind of road will be constructed in all the communities, it is going to open up businesses, agriculture. I am very happy with the quality of work that has been done and it will last. Considering this place that is waterlog unlike some of us that come from the north, the kind of work and the money that they spent here is showing on the road and the quality of work and I think it will open up businesses and agricultural activities along this road. These are the kind of things that we really need in this country to move the country forward”, Ahaziah Suleman, Executive Director, news, Voice of Nigeria, said.

The tour also moved to the Abavo general hospital, where they were conducted round the various facilities in the hospital before moving to the N4.5 billion Awa-Alero road and the Old Lagos-Agbor road with two bridges, even as the editors were also taken on facility tour of the Delta State Leather Work factory sited in Issele-Uku, Aniocha north council.

Also, at the Teachers Professional Development Centre, where Dr Godwin Edozien, briefed the editors on the mind of the state government for setting up the centre, with phase I, having the fencing, surveillance, maintenance, the administration and academic session to accommodate a target 250 teachers would provide adaptation programmes and link the appropriate institutions for certification.

Speaking in an interview, bdur-Rahman Balogun, said the project is laudable as it has to do with knowledge, “you can see that this is a project that will impact knowledge and upgrade teachers and once they are upgraded, the future of the country and the children is hereby guarantee. They will be able to give quality training and enhance their exposure to modern day teaching. I think it is a commendable project which has to be encouraged”.