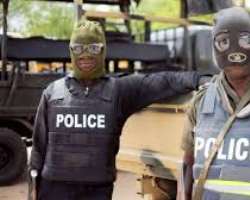 The Police said they have arrested 16 suspected kidnappers, whose ages range from 16 to 45 at Ankpa in Kogi, who specializes in killing innocent people and removing their vital organs.

He said one of the suspects, Ubile Attah masterminded the kidnap and murder of a Police Inspector, Abdul Alfa on Nov. 28, 2017 and snatched his rifle.

“In the course of investigation, it was discovered that this gang from information and intelligence gathered from public spirited individuals and other residents, were responsible for kidnapping, gruesome murder, and ritual killings of innocent people in Kogi State, travellers passing through Kogi State and strangers coming into towns in the area were mostly victims.

“Yakubu Hamidu, Gang Leader (Vigilante Commander of Ankpa), a native of Ankpa and the vigilante leader in the community along with his vigilante guards are the hit-men responsible for the killings of several victims and removing their organs mostly male and female organs including other body parts such as the head, kidney, and other vital body organs and sell them to personalities within and outside the State for rituals,” Moshood said.

He further alleged that Hamidu and his members now in custody confessed to the crime and admitted that they were sponsored and working for Abdulahi Ibrahim Ali a.k.a (Halims) and Shaibu Adamu a.k.a AYE-MARINA.

The force spokesman said they confessed to have handover the body parts to the duo and collecting huge sums of money in hundred of thousands of Naira.

He said Abdulahi Ibrahim Ali a.k.a (Halims) who have volunteered statement to the investigators “is now in Police custody and is suspected to have used the proceed of crime to build and own so many properties including big hotels and several filling stations in Kogi State.”

Moshood added that Shaibu Adamu a.k.a AYE MARINA without known profession or any known means of livelihood was suspected also to have built and own mansions and four filling stations in Ankpa,and another four at Onyangede in Benue State with the proceeds of the crime.

“Inspector Abdul Alfa (who was ambushed and axed to death on his head from behind) by Julius Alhassan and his gang.”

Moshood said investigation was being concluded and efforts intensified to arrest other suspects that included prominent personalities linked to the crime but still at large.

According to him, they will all be arraigned in court on completion of investigation.