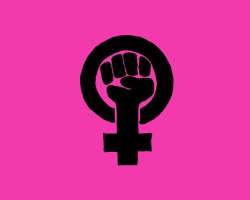 There is a rhetoric that feminism gives women a voice in the society; feminism gave way for the liberation of women in the western world, giving them the right to vote and be voted for, the right to exercise their fundamental human rights like every other person, the right to go to school and pursue their dreams and the right to freedom of speech and association. Feminists ask the question of why subdue and suppress others when you don't want to be subdued, when you're free? Feminism claims to be speaking of the global ills going on against women such as child marriages, female genital mutilation etc. They presume any person especially woman against feminism belongs in the medieval ages; but is that true? Are they really fighting for those things they claimed they are? Is it true that one half of the humanity is at war with the other? Is it true that those who tend to our homes, raise our children are ignored, patronized and disregarded? Do women really have to mingle and work to be considered equal beings with men? Is there freedom in using one’s nudity to satisfy another’s sexual gratification? Is there significant difference between underage marriage and underage sex? Are religious teachings, cultural and traditional values the actual oppressors of women rights? Are women really inferior beings?

These are the questions I shall examine in my series of articles, and I shall hope to show you that the answers are not only reassuring on the whole, but also that they tell us a great deal about the psychological background of the feminist movement. To be able to answer these questions in anything other than a hand-waving fashion, we need harder facts. We need to understand the reasons and intentions behind every action. In doing so, only then can we understand the logic behind it.

There is a growing belief amongst feminists that women are considered inferior beings, hence there is need for the feminists movement to right that injustice through calling for gender equality. They claim pervasive and entrenched social, cultural and religious beliefs and practices often act as barriers to women’s empowerment; giving the norms for women’s role in the household.

Another major theme that prevail the feminists and western mind is that religion treats women as mere things. The woman has no right to take part in social, political or economic life. She may rather have no right to go outdoors. However, religion still has so much to offer women: dignity, respect, and protection in all walks of life.

Orthodox Christianity calls for elimination of gender based discrimination and violence against women. The first prototype of women rights and duties as far as documented religious scripture is concerned, is what the book of Proverbs chapter 31 verses 10 to 31 described. The diction and eloquence in describing what a virtuous woman is in those verses is really thoughtful, as it covers the position and stand of a woman in all walks of life; it describes her value, her place in her husband's heart, her role in the household activities, her intrinsic philanthropic nature, her place in supporting her family, her strength and honor as well as decency and modesty in dressing and talking. One can say the woman described in those verses is an epitome of virtue. If every woman would adapt such qualities and put it into proper practice, it would be a perfect world.

Furthermore, the doctrine of Islam view women with the highest level of status; when a Muslim girl is born, she becomes a reason for her father to enter paradise; when she grows up into a woman and marries a man, she completes half of his religion; when she becomes a mother, her children's paradise lies under her feet. A woman in Islam is as responsible as a man for populating the earth.

In pre-Islamic period, giving birth to girl child is considered bad omen; hence, parents in extreme cases bury her alive or keep her with dishonor – some insult her or they favor the male child over her. In those days, when the news of the birth of a female child is brought to a father, his face becomes dark, and he is filled with inward grief, he hides himself from the people because of the evil of that whereof he has been informed. In order to protect the value and status of girl child, Islam fought that evil practice and substituted it with a best one – a practice which placed female children in a very eminent position as whosoever have daughters and supports them till they mature, he and the noble Prophet (SAW) will be very close in paradise.

More also, women were inherited as mere things in pre-Islamic era and are married off without their consent. Islam however, recognizes women as men’s partners that are created to coexist, so that they may find repose in them, and there is affection and mercy between them. In Islam, whoever Allah grants him a righteous woman has got one half of his re1igion, thus, he should fear Allah in the other half. While conducting marriage in Islam, the consent of the girl must be asked. Islam takes into consideration that the building block of every marriage is love and understanding; love between the couples and understanding between their guardians. Both husband and wife have equal important role in the family. These roles according to Islam, cannot be identical or the same but reciprocal and complementary. The wife-mother’s role which is bringing up the children and providing love, affection and warm gentle care for her family members complements that of the husband who is breadwinner of the family and who provides protection from the external world. In Islam, husband wife relationship is governed by mutual understanding and mutual consultation over important problems. The wife in a Muslim family is a tremendous source of strength to the husband in facing the hardships of life. The husband in turn is always the firm shield that protects the wife from the hazards of life.

Islam placed mothers in highest position of respect, whenever the Qur’an speaks of worshipping Allah alone, the call for being dutiful to parents follows immediately; even amongst the two parents, the status of a mother is three folds than that of a father, as someone came to the Prophet (SAW) and asked who deserves my service most after Allah? The Prophet replied, your mother three times for the sake of emphasis, before mentioning your father.

Similarly, the role of mothers and grandmothers in the traditional and cultural societies placed them in a unique position of power and respect; having been practicing extended family system, older women assist their daughters with their reproduction and nursing the baby which enhances the child-raising capacity and decreases the child mortality. This is scientifically referred to as inclusive fitness, where one’s genetic contribution from evolutionary view point is measured in terms of survival and reproductive success of kin not just one’s children. Also men and women make an equal genetic contribution to their children, but women make a more direct physiological contribution to their children, by carrying and nurturing the baby in her womb for nine months and suckling the baby. For these reasons, the archaic western culture and contemporary Africa display an ideology and tradition of profound veneration for the women folks; they are respected, protected, taken care of etc. hence, the psychological credence to the notion of "women are wonderful effect" which is a phenomenon in psychological and sociological research that people seem to associate more positive attributes with women in general than with men in general, reflecting an emotional bias.

Therefore, we must begin to understand that cultural values and religious teachings are not the real oppressors of women rights; in fact, they tend to individually place women above men in all fronts. If at all a specific gender would complain of bias, it would be the masculine gender because men and women alike always favor women when faced with the decision of picking side between the two genders.

We must understand that feminism is the real oppressor, the true enemy of the feminine gender. I will discuss extensively on this issue in my subsequent sequels of this article.