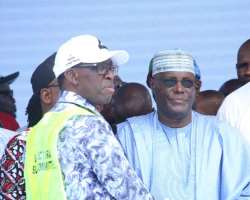 Governor Okowa who extended his goodwill message to the former Vice President in a statement issued on Sunday by his Chief Press Secretary, Charles Aniagwu in Asaba, said Atiku’s victory at the PDP Presidential primary is a victory for the party and Nigerians, adding that he would defeat the ruling All Progressives Congress (APC) in 2019 election.

He expressed optimism that having won the party's ticket, the former Vice President would leverage on his track record as an entrepreneur and great employer of labour to grow the nation's economy.

Governor Okowa further applauded other aspirants who took part in the keenly-contested primary and urged them to uphold the values and philosophy of the PDP by coming together to support Alhaji Atiku Abubakar in the forthcoming general election, in a bid to ensure the PDP emerge victoriously.

The governor noted that the PDP values internal democracy, describing the success of the primary election as another testament to the PDP's democratic credentials.

He also assured members of the party and Nigerians that the party would not rest until they return the country to the part of good governance, rule of law as well as security of lives and property.

“Congratulations to Alhaji Atiku Abubakar on winning the PDP Presidential ticket to contest the 2019 general elections. I have no doubt that Alhaji Abubakar's track record as an entrepreneur and great employer of labour would be replicated in growing the nation's economy which will stand him in good stead in the elections.

“I would also like to commend all the participants in the keenly-contested Primary. I would like them to uphold the values and philosophy of the PDP by joining hands to support Alhaji Atiku Abubakar in the forthcoming elections.

“As a party, the PDP is serious about internal democracy in the party, and the success of the Presidential Primary, with 12 aspirants, further validates our party's democratic credentials.

“Let me assure our party men and Nigerians that we will continue to work hard to lead Nigeria to the next level of its development journey”, he said

He congratulated the National Chairman of the Party, Prince Uche Secondus and members of the National Working Committee as well as all other organs of the party on the success of the PDP National Convention in Port Harcourt.

Governor Okowa also used the opportunity to appreciate members of the 2018 National Convention Planning Committee for their dedication to duty which led to the success of the Convention.