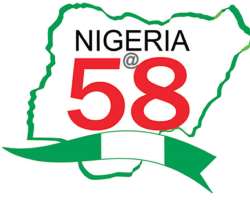 Developing a thriving democracy is not an easy task. There can be no quick fixes or short cuts. These are the most important lessons that we have learnt in our 58 years as an independent nation, President Muhammadu Buhari in his speech to commemorate 58th Independence anniversary of Nigeria.


Has Nigerians made enough sacrifices to be independent in its entirety? Are there indices that Nigeria is on the path of development to prove her self-reliance? A child born in 1960 should be 58 by 2018. At 58, any man who has not settled in life has himself to blame, except if fate as held by some orthodox beliefs, is a determinant factor in life pursuits. I want to throw this simple, sincere but enigmatic question: In Nigeria, how many people get comfortably settled in their lives at the age of 58? This is just two years before the official retirement age of civil servants. And how many citizens are in the civil services? The youths are out of this competition.

What I refer to as “being comfortably settled” is having a tangible permanent source of income, not the hazardous pensions that are being managed by the administrators who are still the creators of the nation’s problems. Comfortable settlement encompasses having a personal living home, not rented or mortgaged; having trained and healthy children from good schools; living healthily and secured. It also includes by extension owning a mobile machine that can facilitate one’s movements within his or her vicinities. To fully attain one of the above is sometimes a full life struggle. How long can this path continue?

I am quick to exonerate the youths from this enigma because the youthful ages are the most turbulent periods for them. So, it is not far from the truth that most parents struggle till death meets them at above 60 without anything worthy to bequeath to their children. Unfortunately, it is the general belief of the African people that “let my child be greater than me”, when actually the parents do not or have no opportunity to settle before the growth of their children. Out of frustration, some just recline to fate and await their exit from life.

Whenever I had the opportunity to travel abroad and return, I often think Nigerians are different species of human beings. I see people moving in all directions but without definite targets. I see people determined to make it in life but without the required complements. I see people essentially hard working from morning to night but earn very little because of lack of incentives and conducive environment to achieve greatness. I see people looking at one another with admiration and love but without the guarantee for tomorrow. And I see people helplessly watching the days pass by without any impression of the homely – they just allow the situation to be as if it is non-Nigerians who will change their conditions.

With utmost sincerity, since the amalgamation of the north and south of Nigeria in 1914, more than one hundred years ago, there have been shaky but attainable forecast on its prosperity in diversity. The nation’s forerunners were of diverse ethno-nationalistic propagation. Whatever differences that existed amongst them, they were intellectually united for the freedom and progress of their own people and gradually the sustenance of unity in diversity. As human beings, they disagreed and agreed. It has been a rough path, though it is in toughness that tough people prosper. Nigerians are tough people, indeed.

Nigeria has been paying heavily, like many developed countries of the world, for its unity and progress. There is hardly a country which can claims total independence in its two recognizable dimensions: governance and economy. It is the provision, availability and sustenance of life basic amenities, as well as the comfort for the larger number of the citizenry that mirror the development of a country. There is hardly any nation where all citizens are totally poor or all citizens rich on equal level. Independence, therefore, is relative in interpretation. Poverty, unbelievably, also strikes in recognized rich or developed countries. Every country has a rough path to stability. Many countries across the world are towing the rough paths to stabilize.

Amidst diverse, complex and always expectant groups of people, Nigeria has towed three major paths to thrive. The paths are really rough but they have been teaching the citizens how to live together. Surely without them, things would have been worse. But because Nigerians are wise people, they tread over every rough path that they approach. The first was the amalgamation itself and its far-reaching effects that culminated to the 30-month civil war. The wars in Nigeria is one too many. Though the Briafran war was the most pronounced, Nigeria has witnessed many regional wars that have claimed huge losses of lives and properties. No part of Nigeria is free, though some parts have lost more. Besides, Nigeria has also witnessed several civil disturbances.

The Biafran war was fought on perforated pretext and contrived exigency. It shouldn’t have been. But it was a detergent because it taught Nigerians the lesson not to undermine any component of the nation. If it was not fought then, it would have been later and the consequences might have been deadlier. Neither of the sides found it easy. It was an eye opener too for those citizens who mistakenly took the others for granted from both sides. I must commend those patriots who quenched the fire and bought the nation back to the path of unity in diversity. It has become a reference point that is gradually shaping the future of Nigeria.

The era shortly before the war cum the war itself led Nigeria to another rough path. The military eras that lined up in the name of protecting the unity of Nigeria had its consequences on individual citizens and the nation as a whole. Generally, nowhere in the world under military rule that sees total peace and unity. The military, anywhere, is known for what they are known. It may not be wrong to postulate that they are often not too comfortable with a lot of civil and democratic norms because of the nature of their profession and trainings. They are much more comfortable with the barracks and its hierarchic setup. They are harsh. They obey last orders. They believe in actions. They are always afraid that delay is dangerous. So, they take quick decisions and act fast. They do not believe in long bureaucratic bottlenecks that is part and parcel of democracy.

With all these qualities, it is clear that the military governments were of very tiny size with only few persons taking decisions subjected to the unquestionable and overall approval of the head. That is where the problem lied. The long military regimes inflicted on the country large part of the wounds the citizens are licking today. Who dare you question what the military head said or did? There was always suspicion amongst them, thus the successive coups whose effects ravaged the nation’s fortunes and bastardized the image of the country before the international community.

The first coup d'état was in October 1, 1966 which saw the elimination of top political class of the nation. 1966 was supposed to be the 6th Independence anniversary of Nigeria. Major General Johnson Aguiyi-Ironsi was made the Head of the government though he was soon overthrown and murdered in another coup in July of the same year. This may partly have triggered the agitation by the Igbo for Biafra as Ironsi, an Igbo, was killed. Gen. Murtala Muhammad took over and also was killed after few months. Gen. Yakubu Gowon whose regime fought the Biafra war came into power. The long military junta from 1966 to 1999 was interrupted by a democratic government between 1979 and 1983 under the leadership of Alhaji Shehu Shagari. That means Nigeria was subjected to the harsh military rule for 29 years.

The 29 years were full of suffocating experiences. From Ironsi to Murtala to Gowon to Obasanjo to Buhari to Babangida to Abacha to Abdulsalami, Nigeria was in the common language of “pepper soup”. Every of them tried his best with the military language and action. There were appointments of incompetent and inexperienced citizens to man sensitive positions; there were recorded violations of human rights; there was no respect or consideration for the rule of law; there was freedom of gross financial misconducts; there was dictatorship; there was lack of independence for the judiciary and other key organs that ensure efficient and effective governance and there was “unimaginable” institution of corruption. There were no checks and balances.

That is the toughest path Nigeria has towed. The worst thing that kills a people is corruption and lack of freedom of expression and association. Monies disappeared from the nation’s purse without question. In short, Nigeria revenues were often “kidnapped” on their ways to the nation’s treasury. The corruption that was “built” by the military cannot be destroyed overnight. Unfortunately, the 16 years of democratic experiences that followed the military era did not help matter. The successive democratic governments towed the rough path of the military and encouraged massive looting with impunity. During this period, Nigeria made the largest fortunes that would have actually developed the country or at least put it on the path of development. The foundation for development was elusive. The governments, though with beautiful policies, could not implement them due to corruption. A few citizens “kidnapped” the country and its economy.

The last rough path Nigeria has to tow is the full war on corruption which the present democratic regime is out to achieve. I have never seen before now in Nigeria where citizens think ten times before spending even their legitimate earnings. I have never seen before now in Nigeria when elections are very close and monies are not openly and lavished shared. The rough path to kill corruption is worthy to tow and if it can be caged or reduced to the minimum level, development and comfortable life for Nigerians will be the natural result.

These are the rough paths upon which Nigeria has treaded all along. How I wish and pray that this last path take us to the Promised Land. There is no doubt that the nation now has a committed leadership. Going by words and actions, there is hope. With all assurances by the incumbent democratic president to sustain promotion, protection and preservation of a united, peaceful, prosperous and secure Nigeria for every citizen irrespective of background, it is anticipated that the roughest path should be towed to emancipate Nigerians who are naturally tough people and develop Nigeria whose growth is long overdue.