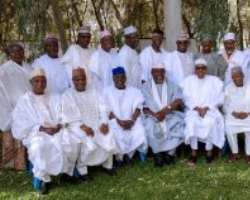 Governors elected on the platform of the All Progressives Congress on Thursday met with President Muhammadu Buhari over the party's rancorous primaries in different parts of the country, The Punch reports.

The newspaper  learnt that the governors who were at the Presidential Villa, Abuja, protested against the handling of the primaries by the Adams Oshiomhole-led National Working Committee of the APC.

According to the report:  complaints of the governors ranged from alleged injustice in the governorship primaries to the omission of their loyalists from the list of the party's senatorial aspirants.

While the Ondo State Governor, Rotimi Akeredolu; and his Nasarawa State counterpart, Tanko Al-Makura, were bitter because of the removal of their loyalists from the list, the Ogun State Governor, Ibikunle Amosun, and Governor Abdulaziz  Yari of Zamfara State kicked against the conduct of the governorship primaries in their states by the NWC.

“The focus of the meeting was the problem associated with the primaries, particularly the poor handling of the shadow elections by the NWC,” a chieftain of the party, who spoke on condition of anonymity, said.

At the end of the meeting, the Chairman of the Progressives Governors Forum, Rochas Okorocha, said the leadership of the APC must do the right thing and allow everybody to participate in the primaries.

Okorocha, who is the Imo State Governor, said this during a brief interview by State House correspondents after leading eight other APC governors to the meeting with the President.

It was gathered that all the governors who met behind closed-doors with the President had issues with party primaries in their states.

Okorocha confirmed that the meeting was about the rancorous party primaries across the country.

He expressed the belief that the party leadership would rescind some of its decision on the matter.

He said, “We came to review the crises that characterised our primaries. We are looking for a way out in this regard; we are going to find solution. Our party believes in justice, equity and fairness.

“We are saying that let the right thing be done and let everyone contest the elections.”

Akeredolu and Nasir el-Rufai of Kaduna State had on Wednesday met the President over the same matter.

The meeting between the President and the governors lasted about two hours.

After accompanying the governors to where their cars were parked, the Chief of Staff also got into his car and was driven out of the premises. It was not clear whether they were heading to the same place.

APC NWC cancels Edo N/Assembly primaries
In Edo State on Thursday, the NWC of the APC cancelled what it called  “unauthorised congresses” in Edo State to elect candidates for the Senate, House of Representatives and House of Assembly.

This was contained is a statement by the party's acting National Publicity Secretary, Yekini Nabena.

The spokesman said, “The exercise conducted by unauthorised persons in collaboration with the Edo State Working Committee is hereby (declared) null and void.

“A primary election committee under the chairmanship of Hajia Farida Suleiman will be in Edo State later today (Thursday) to conduct the primaries into the Senate, House of Representatives and House of Assembly.

“The committee will make available the list of aspirants screened for the exercise and will conduct a transparent primary election in accordance with the guidelines and constitution of the APC.”

However, the Edo State APC disagreed with the cancellation by the NWC.

It vowed to announce the results of the exercise held across the 192 wards in the state.

The state APC Chairman, Mr Anselm Ojezua, who spoke to one of our correspondents on the telephone, said the state chapter observed the party's guidelines.

He said, “I have my doubt about the legitimacy of that decision.

“First, we have not been communicated formally. Secondly, the process has been concluded and I doubt if they have the power to do what they purportedly did. Certainly (the results will be announced).”

Ojezua urged members of the state chapter to disregard the decision of the party's national secretariat.

He said, “We have been through the process. We are talking about human beings. These are not articles; they are not furniture

“These people (party members) have been kept here for days and the processes were supposed to start since Monday. Today is the last day by the programme drawn up by the working committee in accordance with the decision of the National Executive Committee.”

On the allegation that the individuals who organised the primaries were not recognised by the NWC, the state chairman said, “That is not true. They were appointed by the National Working Committee and I have the proof of it because they notified me.

“So, for them (NWC) to disown them (organisers of the primaries) makes me suspicious of their motives.

“We cannot come out twice for the same event. We have done our primaries. They are legitimate and there is no going back.”

Ondo members pass vote of no confidence in Oshiomhole

In Ondo State, members of the APC stormed major roads in Akure, the state capital, protesting against alleged imposition of candidates by the leadership of the party.

The move was rejected by senatorial aspirants and the state executive members of the party.

The protesters demanded the resignation of Oshiomhole, saying they had passed vote of no confidence in him. They also declared that his administration had failed members of the party across the country.

They displayed placards with inscriptions such as, “Ondo State will never allow Tinubu and Oshiomhole to destroy APC,' ' We say no to imposition,' 'Oshiomhole is a thief, Tinubu is a thief,' and 'Allow us to choose our leaders,' among others.

Addressing the protesters in front of the party secretariat, the APC Youth Leader, Mr Olutayo Babalayo, said members of the party in Ondo State would not allow the national leadership to impose candidates on them.

Babalayo said, “We say no to imposition. We say no to automatic ticket to any aspirant. We ask for change and this is not the change we asked for.

“When Adams Oshiomhole took the leadership from Oyegun we thought everything would change for good, but things are worse. Oshiomhole has not really helped us.”

Aspirants, others kick in states
Also in Kano State, a coalition of APC aspirants who lost during the senatorial primaries said they had resolved to challenge the conduct of the exercise and would seek intervention of the President and the party's national chairman.

One of the contestants, Senator Isa Zarewa, condemned the conduct of the direct primaries.

In Borno, the appearance of the name of an APC governorship aspirant, Senator Abubakar Kyari, on ballot papers for the Borno North senatorial primary caused uproar.

Kyari, was as at last week a governorship aspirant, but stepped down for the elected candidate, Prof. Babagana Umara.

One of the aspirants, Fati Kakena, said she was surprised to see Kyari's name on ballot papers.

She added that she was amazed when she was told that after elections   in three local government areas out of the 10 in Borno North, the remaining seven would be suspended because ballots had been exhausted.

She said, “There were three senatorial aspirants that purchased the forms and were screened by the NWC. It was shocking to see Senator Abu Kyari's name.

“I found out that he purchased the two forms, but only submitted governorship form and never went for the screening for the senatorial aspirants.”

Kyari, however, said any enquiry should be directed to the party.

“If I was not screened, my name would not have been on the ballot papers,” he added.

An APC House of Representatives aspirant in the FCT, Prof Al-Mustapha Medaner, on Thursday protested against the alleged plan to dump the direct mode for the indirect primaries.

The Leader, Prof. Al-Mustapha Usiju Medaner Campaign Organisation, Umar Mahmud, in a statement on Thursday said Medaner was opposed to indirect primary mode which he said was against the directive by the NWC.