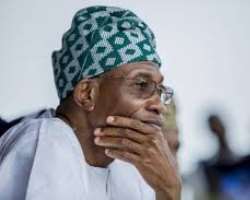 "For never was a story of more woe than this of Juliet and her Romeo."

- William Shakespeare in "Romeo And Juliet."
The love affair was inebriating. It was like an emotional response of a woman who has just recently been disappointed and hurt by a forced marriage. The previous lover did his best to make her happy. But because her heart was never in the relationship ab initio, she could not see anything good in the relationship. Thus, it was easier for her to get carried away by a new suitor. Sweet mouthed, handsome and charismatic but vacuous, deceitful and duplicitous. She fell easily, head over heels in love. But never was there a story of more woe than this.

I didn't know him that well. I was not close to him. But I had so many friends who vouched for him, through some of whom I later met him. Before then, I had so many who claimed to know him. I had so many school mates at all levels who saw in him, a new Dawn, a new hope for Osun State and its people. There was even this my brother-in-law who regaled me with his exploits at Alimosho. Everyone spoke glowingly of and about him across the State.

As an Ìjèsà son, I was bombarded by family, friends, acquaintances, low and high, rich and poor, noble and common, Royal and ordinary, to give him support. They insisted, that for the first time in a long while, an Ìjèsà son would govern Osun State and help realise many of its clamoured aspirations. Many believed that for so long, the Ìjèsàs have been unlucky to have anyone in government to cater to their aspirations. Most of them saw in Rauf Aregbesola, a Messiah.

Fortunately, for Ogbeni Rauf Adesoji Aregbesola, it was not the Ìjèsàs alone who wanted him. It was evident that the people of Osun State, across the board, were just tired of the affable Prince of Okuku, a gentleman to the core, retired Brigadier General Olagunsoye Oyinlola and his Peoples Democratic Party, (PDP). He and his PDP were rejected with funfair. They called Oyinlola names. The propaganda outfit of the Lagos boys demonized him and weird stories were made up about him and told around the State. They could not appreciate him.

Also, at this point in time and in History, the Iragbiji born "Eko boy" and politician, Bola Ahmed Tinubu, was riding the wave of that exhaustion with the PDP. With his political party, AC and later ACN, he provided the needed template to fight and chase out the PDP from Southwest. He latched to the sobriquet of "progressivism," to deceive the people and made pretensions to Awoism. His group, the Afenifere Renewal Group (which this writer had initially thought to be something fresh) even had a signature cap moulded like the Awo Cap, to complete the grand deceit.

Tinúbû's plot was made with criminal exactitude. To birth his political party, Action Congress (AC), he had to junk the Alliance for Democracy (AD) and the leadership that brought him to power. He betrayed the authentic Yorùbá leadership that made him the Governor of Lagos State. Tinubu did not just stab them in the back, he followed up by lacerating them facetiously but determinedly. He made them groan in agony with a saintly sadistic satisfaction. Then, he took his time to anatomize them, clinically cutting them into gruesome but meatly pieces, putting some of their sliced parts aside for political peppersoup, some other parts for political suya and the rest for real partisan meal. He audaciously gloated and consecratively glowed.

While he glowed, with the fleecing of Lagos Treasury and Commonwealth, Tinubu set out to manacle the Yorùbá Nation, contaminate its values and annihilate its essence, its soul, through destructive cronyism. He planted Kayode Fayemi in Ekiti State and Rauf Aregbesola in Osun State. Later he supported Ibikunle Amosun in Ogun State and Abiola Ajimobi in Oyo State. Ondo people resisted him at all costs. He funded his cronies, now known as "Ajélès" from the illicitly acquired funds from the bottomless well of wealth in Lagos State.

-John Fowles, commenting on the response of the Germans to the murderous initiatives of Adolf Hitler in "The Magus."

On arrival in Osun State, the deceit, duplicity and lies of the Bourdillon boys anchored by Aregbesola worked wonders. Everyone took to them. The people were inebriated into stupor. Osun people licked the Alimosho lies like a hungry dog would lick diarrhea faeces. They all marinated in enthusiasm and paid no due attention to the true intentions of the Tinubu boys. Aregbesola became the symbol of hope and change, albeit a misplaced one, that would chase away the much maligned and disliked PDP.

With the help of the people of Osun State, the PDP was chased away. Aregbesola became the toast. He was celebrated all over. He was praised and eulogised all of the time. Drums and dancers suffaced everywhere he went. Often times,he would step down at events to dance his heart out to the admiration and cheering of the people.Songs were composed for and about him. It was funfair. People were excited and happy for and about him.

He became swollen headed and stiff necked. He became arrogant and condescending. He became audacious and autocratic. He became biggety and bossy. He became cavalier and cocky. He became conceited and contemptuous. He became disdainful and domineering. He became haughty and high handed. Pompous and presumptuous. Egoistic and egotistic. Snippy and sniffy. Insouciant and insolent. Boastful and bashful.

He promised "Ònà Baba Ònà" to denote the many roads to be constructed across Osun State by his Administration. He brought the "Opón Imo" and even invited the dead to participate in its launching. So much noise was made about it, that the heavens witnessed the event. Then, the "O" Series emerged. There was "O" this and that. Many of them phantom programmes designed to loot the State and cart away Osun's money to Lagos. The Osun people never benefited from any of them, if they did, probably tenuously.

When the saga of half salaries began, the civil servants, the teachers, the pensioners all had an abiding faith and trust in Aregbesola. They believed that it was going to be temporary. They felt that all was in the interest of the State. They were of the view that for the progress of the State, such a temporary sacrifice was not too much. By the time they found out that they have been duped, many of them had gone to the great beyond.

Then, he began to destroy the schools. He made malignant amalgamations. He enforced single uniforms across the State with a single seamstress. People were aghast. They protested, but they were appealed to, to be patient, that their concerns would be addressed. But that never happened. Things only got worse. He created religious disharmony in an otherwise religiously peaceful environment.

"Few tragedies can be more extensive than the stunting of life, few injustices deeper than the denial of an opportunity to strive or even to hope, by a limit imposed from without, but falsely identified as lying within."

- Stephen Jay Gold, in "The Mismeasure Of Man."
By the end of Aregbesola's first term, the burst of the bubble had become ostensible. He was unable to pay the workers' salaries and the pensioners' entitlements. He was owing four months wages by the time the reelection knocked at the door. But he had President Goodluck Jonathan to lie against and blame for his own inadequacies. He deceived the people again and won the second term tenure. And then Mohammadu Buhari came. Things got worse as President Jonathan was no longer in the picture.

Aregbesola, a certified fraudulent Awoist, went on to destroy Osun State on so many fronts, amassing unprecedented debts and deaths of the innocents. Well, he is also a fraudulent Engineer, and we all know the story. At a point, he lamented publicly that he could not get any institution to borrow more money from. Yet, he was able to manage to continue paying his contractors while he refused to pay due salaries and pensions.

Our Kábíyèsís across the length and breadth of Osun State bit their fingers in painful silence. Constantly, they were thoroughly humiliated and embarrassed by Rauf Aregbesola who made them to wait for him in the sun several hours at events. He was always coming late to events for upward of three to four hours at times. One of the first class Obas in Osun State had inadvertently soliloquized in the presence of this writer, "Ha, Omolúàbí gidi ni Oyinlola." Meaning, "Oyinlola was a greatly cultured individual with integrity."

The Ìyálójàs who used to frequent Aregbesola's events with their calisthenic head gears when he took over power, began to withdraw. The drums began to dessicate into doldrums. The dances dallianced into dispassion.. The songs sauntered into sourness and off the scenes. The pains of hunger began to show. The effect of unpaid dues began to metastasize. Ululation replaced adulation. Anger replaced joy. Sadness replaced happiness. Melancholy replaced merriment. Eeriness replaced cheeriness. Regrets replaced enthusiasm. And an ominous darkness descended to create a landscape of anemia and a state of anomie for the people of Osun.

Those with the greatest disappointments are Aregbesola's purported Ìjèsà people who invested their lives (because many of them died/lost their lives in the struggle), their emotions, their monies and all that they had, to ensure he got his assumed mandate. As far as they are concerned, they got nothing in return for their investments. He promised to dualize the longest road through the City, he never did. He promised to renovate the historical and sprawling Atakumosa Market, he never did. He promised to make tap water flow in Ìjèsà land, he never did. They needed him to turn the soil for a foundation of their own University, he failed them. And he called Kabiyesi Owa Obokun Adimula of Ìjèsàland, Oba (Dr.) Adekunle Aromolaran, unprintable invectives. That's the Kabiyesi who almost lost his throne fo tacitly supporting his candidature.

It has not been unconventional, for people to at times, jump from frying pan into fire, a phrase that could be appropriately used to describe the change from the tenure of Prince Olagunsoye Oyinlola to that of Rauf Aregbesola. But this time around, the people of Osun State jumped from frying pan into inferno. The inferno raged the State into comatose. The State is mortgaged and ready to be foreclosed. The initial dropping tears have become a waterfall of misery and agony.

Just like the Biblical King Solomon, who started his reign so beautifully but ended up tragically, Aregbesola is a SOLOMONIC TRAGEDY.