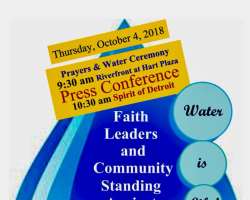 The People's Water Board, Faith Action Committee will be holding a Press Conference tomorrow, Thursday October 4 at Hart Plaza at 9:30 a.m. Prayers and Water Ceremony: On the Riverfront at the Hart Plaza followed by a press conference at 10:30 a.m. at the Spirit of Detroit ~ Statue at the Coleman A Young Building in support of thousands of Detroit residents who are affected by the water shutoff due to delinquent bills.

Such actions against the poor who could not afford to pay the water bills, is wrong, immoral and unethical. Imam Steve Elturk of Islamic Organization of North America, IONA and founding member of AHRC-USA and Imam Sayed H. Qazwini of the American Muslim Institute are taking part in the Press Conference and Prayers and Water Ceremony events.

"We, the Muslim Community, should be at the forefront fighting for human rights issues. Water is a human right and is a social justice issue," said Imam Elturk, Imam of IONA & AHRC Founding Member. "I trust that you can join me this Thursday at 9:30 a.m. at Hart Plaza in downtown Detroit. Please do what you can to be part of the movement," continued Imam Elturk.

The People's Water Board in their statement said: At this historic gathering, Detroit-area faith leaders will stand in solidarity for the human right to water and the dignity of all persons as children of God. Let us shine the Spirit of God to raise the moral consciousness of those who have the power to end this crisis. People of faith are called to voice our shared moral commitment for those in hardship to have access to clean and affordable water.

Faith Leaders will affirm Water is a Basic Necessity by proclaiming the following:

1. Stop the water shut-offs
2. Reinstate water to those who have had their water shut off.

3. Implement an affordability plan
The American Human Rights Council (AHRC-USA) joins the People's Water Board in calling for active participation against such unfair practices. Water is not a privilege to those who can afford it. Water is a human right that must be preserved and provided to people. AHRC calls on the city of Detroit, county and the state authorities to act immediately and restore services to those in dire need. AHRC-USA also calls on people of good will to act and help those in need during such difficult times.