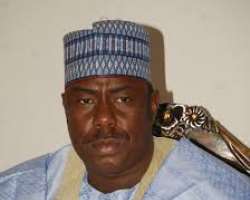 The Honourable Minister of State for Works, Power and Transport, Alhaji Mustapha Baba Shehuri has in strong terms called on the APC National Working Committee, NWC as a matter of urgency and importance to cancel or postpone Borno State Governorship primary election because the election from preparation to implementation was fraught with several irregularities and it did not meet the barest minimum requirement for a free, fair and credible election.

He also said that 12 gubernatorial aspirants met yesterday (Saturday), " we took a common decision on the conduct of the APC gubernatorial primaries scheduled for (Sunday) ".

" Unfortunately, and as we had feared, the indirect primaries exercise conducted in Borno state from the preparation to implementation was fraught with several irregularities. It did not meet the barest minimum required for a free, fair and credible election.

The Minister who stated this Tuesday at a press conference with journalists in Gus residence in Maiduguri said some of the irregularities that took place amongst others include, media release of preferred candidate by the State Governor, stating that, the governor compromised the entire process by anointing a governorship candidate for the party.

He further alleged that the governor directed the State Chairman of the APC, Hon. Ali Bukar Dalori to assemble 13 of the aspirants, majority of whom are here with us can testify of the governor's preferred candidate while all the other aspirants were instructed to withdraw and some of them refused.

The Spokesman of the governorship aspirants forum also accused the governor of hijacking the APC Electoral Committee for Borno,state, saying, " having stated his partiality towards one of the aspirants he sponsored, can not preside at the direct host of the members of the Electoral Panel.

Hon. Mustapha also alleged that it was a common knowledge that the governor purchased nomination forms for 10 of his state commissioners and political associates in order to compromise the process .

"We call on the security agencies to investigate the source of the funds used in purchasing the nomination forms. They should invite these aspirants for questioning where they got the funds and the banks used for the payments.

" It is a common knowledge that the governor purchased these nomination forms so that these aspirants would eventually be asked to step down for his preferred candidate as we witnessed on (Monday).

"The President has worked assiduously to stamp out corruption and stealing of public funds. We urge the security agencies to rise up to this challenge and investigate first the source of the funds", Shehuri said.

" There were complaints from the delegates of southern Borno that they were not allowed into the venue of the election while fake delegates in uniform were brought in to vote the aspirant endorsed by the governor.

"Permanent Secretaries, Special Advisers and many top government officials of the state were brought in as delegates contrary to the APC constitutional guidance of the indirect primary election.

Another allegation, he said was lack of access to delegates where the governor he said constituted a committee of those persons per local government comprising of the newly sworn in local government caretaker committee chairmen, the APC Chairmen and members of the Borno state house of assembly.

" They were charged with the responsibility of bringing in the delegates to Maiduguri, camping them under lock and key, and dressing them in uniforms. All the aspirants were denied access to the delegates except the governor and his preferred candidate.

"In the nights of Thursdays 27th, Friday 28 th and Saturday 29th September 2018, all the aspirants were prevented from going round to meet their delegates except the governor and his preferred candidate due to physical harassment and intimidation by the military patrols under the pretence of a curfew from 10 pm. Meanwhile, the governor and his preferred candidate had time going round to the various venues where the delegates were camped.

" Illegal utilization of state resources to induce delegates. It is on record that the governor authorized the release of one moth LGC grant to each of the 27 LGCs without the statutory deductions and caused the funds to be cashed. The sum of N200,000 each was given to all the delegates under oath as Inducement to influence them vote for the governors preferred Candidate. Those who refused this inducement and swear an oath were booted out.

"This is a criminal offence and we draw the attention of the anti corruption agencies , EFCC and ICPC to investigate the massive withdrawal of cash from the accounts of the local governments on the eve of the primaries.

" Based on the forgoing, 12 of the aspirants came together and took a stand condemning the bastardization of the primary election designed by the state governor to favour his preferred candidate. We have since written a letter of protest to the National Chairman of the APC demanding a postponement or cancellation of the charade called primacy election.

"We are also aware that the governor is set to compromise all the other primaries in the state including the Senate, House of Representatives and particularly, the State House of Assembly," Shehuri said.

"In the process of his nocturnal meetings on Friday, 28 th September 2018 and Saturday, 29th September 2018 as he went round , he informed the delegates that he had endorsed the automatic return of all the State House of Assembly members . About 150 other party members have brought forms and are braced to contest this particular primary election for the State House of Assembly. By this singular act by the governor, all these candidates will be disenfranchised and will not have the opportunity to participate in a free, fair and credible primaries.

" In view of the very tense security situation of the state, we urge the National Chairman, NWC of the APC and the President of the Federal Republic of Nigeria, whose re-election , we the aspirants are all committed to, to take the appropriate steps to salvage this aberration so that it does not lead to a breakdown of the fragile law and order we currently enjoy in the state.

"In order to maintain peace, we have instructed all our supporters to remain peaceful. Calm and orderly as we patiently await the decision of the party headquarters", Mustapha said.