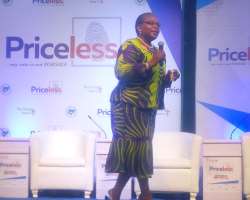 The Convener of the Red Card Movement and onetime Education Minister, Mrs Obiageli Ezekwesili, has called on Nigerians to come out in their numbers to vote and protect their votes.

Ezekwesili made the call at a one-day conference organised by The Church Must Vote, an NGO, on Monday in Abuja stressed that it was time for Nigerians to determine the quality of leadership they get through massive voting.

She noted the theme of the conference as ''The Church Stand Against Vote Buying and Selling, with the slog ''My Vote Is Not For Sell, My Vote Must Count"

She said that nobody should be comfortable to seat at home during the upcoming 2019 general election, because it was time to get rid of the old order of politicians in the country.

The former minister turned activist said that the quality of democracy was dependent on quality of vote and INEC must protect the vote of Nigerians.

''We must compel INEC to gather some of the cases of vote buying and selling that they have identified and take them to court.

''We must compel the Judiciary to act and not to defer judgement on such matters because our democracy is under existential treat.

''Citizens must understand the power they possess and through that power, you determine the quality of leaders to lead the country," she said.

Ezekwesili said that it was time to build a nation with leaders who were elected on the bases of character, competence and capacity.

''So I support The Church Must Vote, to say your vote must count because your vote does count, if it didn't count, they will not pay for it.

''It is time to decide that nobody can pay for your vote because it is priceless, the people are dependent on the quality of leaders that they get for themselves.

''So let our vote count, we must cry out if we see our vote being bought or stolen," she said.

Rev. William Okoye, General Overseer, All Christians Fellowship Mission, said that some people sell their votes due to hunger and starvation.

Okoye stressed that it was better to endure hunger which was immediate in order to better their future as any hunger that has hope does not kill.

''If you are hungry today and have hope that tomorrow will be better, you will be able to manage, so we are trying to send that hope to Nigerians through the church.

''We want Nigerians to know that the future will be bright if we endure the pains of now and ensure that we don't sell our vote and use our vote to bring about the better future that we are expecting," he said.

Ikechukwu Nmor, Founder, The Church Must Vote, said that the voting right of every Nigerian was priceless as such shouldn't be trade for anything or any amount.

Nigeria is a great Nation but with little performance, something must be done now to change things for the better.

''I am here to say I stand against vote buying and selling and no amount of money is enough to sell my vote and mortgage the future of our generation.

Nmor said it is important that the elections and the outcome reflect a representative and inclusive decision of all demographics, age, gender and believes,".