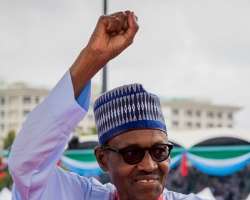 The elections held in Borno State with members including Governor Kashim Shettima taking part in wards, the party's chairman, Dalori told journalists during a press briefing held at the party's State headquarters in Maiduguri. He said that officials from the Independent National Electoral Commission, INEC, observed the election in line with electoral laws.

Dalori said the election held peacefully, stakeholders and members were mobilized to respective wards by the party through a support from Governor Shettima who is the party's leader in the state.

The chairman thanked members for taking part in the election and urged them to prepare their voters cards to turn out higher votes for the President during the main election in February, 2019. He also called on citizens ‎across party divides to reciprocate President Buhari’s love for Borno State by giving him massive votes.

The chairman said the state APC, led by Governor Shettima is prepared to work tirelessly to ensure an impressive number of votes for the President and all the candidates of the party during the 2019 election.