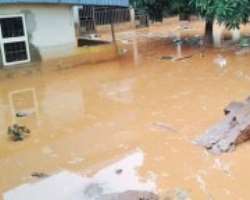 Okechukwu, 18, is reported to have drowned in the flood Thursday night, with his lifeless body found floating on the river Friday morning.

According to the deceased's mother, Mrs Amaechi Osadebe, 'Okey' (as he was fondly called) was in the company of two persons when he was swept up in the flash flood, with no opportunity for him to escape or be rescued by his friends, as the river was turbulent at the time.

Efforts made to rescue him failed, his mother said, as the flood swept him off to a spot on the river where his body was later found floating in the morning.

The chairman of Ogbaru local government area, Chief Arinzechukwu Awogu, who was at Okechukwu's family house Friday morning to sympathize with the Osadebe family, regretted the loss of lives in the council area due to the flood.

Awogu called on the people to take extra precautions while the floods last, while assuring that the disaster situation would soon abate.

Okechukwu is the second flood casualty in Ogbaru this week, the other being the case of a 9-year-old girl, Benedict Uzo, from Amiyi community, who died Wednesday while out to fetch water from the river.

The State Emergency Management Agency has provided the displaced families with relief materials.