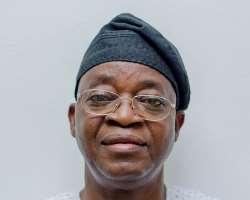 The Independent National Electoral Commission (INEC) today declared Alhaji Gboyega Oyetola, the candidate of All Progressive Congress as the winner of the gubernatorial election in the state.

The INEC Returning Officer, Professor Joseph Abiola Fiwape who announced the result said the APC candidate scored 255,505 votes in the election and that the candidate of the Peoples’ Democratic Party, (PDP) got 255,023.

After the announcement of the result, agents of the political parties that participated in the election signed and collected copies of the result.

Agent of the PDP, Mr Dele Adeleke made frantic efforts to call the attention of Professor Fiwape to certain errors in the figure of votes recorded for Senator Adeleke but to no avail.

With the announcement, Oyetola becomes the Osun State Governor-elect and he would succeed Governor Rauf Aregbesola who will complete his tenure in November.