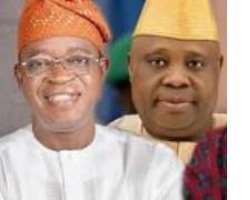 The attention of the Committee for the Protection of Peoples Mandate (CPPM) which is a civil society organization, has been drawn to the undemocratic attempts from expected quarters to mislead, misinform, incite against and malign the integrity of the Independent National Electoral Commission (INEC) over it's conduct and the declaration of the 2018 Osun state gubernatorial election as inconclusive on the basis of the provisions of section 153 of the electoral act.

According to the provisions of the electoral act which is a sub set of the 1999 constitution passed into law by the National Assembly, "Where the difference in lawful votes scored by the two leading candidates in an election is less than the number of registered voters in cancelled polling units, the election shall be declared inconclusive. (The quote above is my use of words)

of the All Progressives Congress. scored 240,867 while Idris Wada of the Peoples Democratic Party

scored 199,514 votes. Mr. Kucha. said the margin of votes between. Abubakar Audu and Idris Wada is

41,353. And thereby making the. election inconclusive because the. total number of registered voters in

Therefore, if the quoted provision of the electoral act was applied legally and logically by INEC in 2015 in Kogi state, what makes Osun State different within the same geographical territory called Nigeria? Or are we saying that what is sauce for the goose, should not be sauce for the gander? No way.

We also need to educate our people to realize that INEC is a creation of the constitution just like the electoral law and so, INEC conduct at all times, must be in conformity with provisions of the law establishing it, if we are to deepen democracy and ensure a better society for all.

In this vein, we at CPPM align our voices with those of patriots and democrats in congratulating INEC for it's commendable conduct of the 2018 Osun State gubernatorial election of Saturday 22nd September, 2018 and urge it to maintain the tempo, as Nigerians look forward to the conclusiveness of the rerun election of Thursday 27th September 2018 in the affected polling units in Osun State, while at the same time, assuring the commission of the encouragement and unalloyed support of Nigerians to deliver on it's mandate in the face of misguided and inciting attacks and blackmail from anti democratic elements and their agents.