The Inhumanity of Royal Dutch Shell in Ogoniland 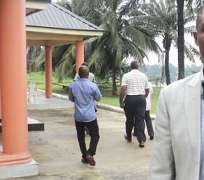 t's barely two months to the twenty third memorial of nine Ogons killed for Shell by the Nigerian authorities on November 10, 1995. This evil Enterprise we call Shell has stopped at nothing to push forward it's brutally against the Ogoni people.

Few weeks ago, we - the Movement for the Survival of the Ogoni People (MOSOP) called for investigations into the cases of harrassment against Ogoni women in Gokana by soldiers attached to Shell workers currently laying pipelines in Ogoniland. And more recently, the cases of Doodealo and Dr Nwosu, both researchers who were brutally manhandled by the same soldiers while they attempted to take samples for soil tests in Ogoniland.

At this moment, the Nigerian authorities have not acted in any way to protect our women from further abuses nor have they commissioned any probe into these cases.

In their response to the harassment of women, Shell claimed that the soldiers do not take instructions from them. But the fact remains that Shell invited the soldiers in their desperation to return to oil production in Ogoniland without any broad-based discussions with the people and therefore cannot deny responsibility for the crimes.

Shell in Nigeria is inhuman and a Shame. Its conduct in Nigeria is despicable and an urgly representation of today's business Community. With her overwhelming influence on the Nigerian government, Shell has taken advantage of our country to inflict monumental pain on our people, abusing citizen's rights and has also devised a way of evading justice for the people.

In Ogoniland, Shell has polluted the land, turning it into a wasteland, destroying the people's livelihoods and insisting on not compensating the people for the losses. Fully aware of the discriminatory laws under which Nigeria operates, the very laws that threaten the existence of resource-based communities like the Ogoni, Shell has completely abandoned their social responsibilities and has instead divided the people against each other just to maintain it's dominance and deprive the people of every voice that can announce their oppression to the knowledge of the world.

Shell has prosecuted the war on Ogoni with every resource available to it, exploiting the people's weaknesses especially the discriminatory laws that has deprived the Ogoni people their rightful place in our country. Rather than helping to build a progressive and prosperous host Community, Shell is comfortable with the current system that allows the company do what it dares not do in Europe. After taking over 100 billion dollars worth of oil from Ogoni, a company like shell which doesn't use her conscience continues to act indifferently even as it's Pollutions in Ogoni sadly and currently kills over 200 Ogonis every week.

Shell does not feel bothered that people's livelihoods have been destroyed and they deserve to be compensated. Shell cannot claim to be ignorant about the fact that their cannot be remediation without compensation for damages.

But Shell must pay for her crimes in Ogoniland. It does not matter the strength of the Nigerian armies, Ogoni will not surrender to murderers like Shell nor shall we surrender to the discriminatory laws of Nigeria which threaten our survival.

We demand justice for the Ogoni people of Nigeria. We demand political rights to self determination, we demand the rights to a respectable and dignified living. These rights are currently enjoyed by other groups in Nigeria who take away Ogoni resources and share among themselves leaving Ogoni with nothing but the pains and sad consequences of revenue generation, we demand the review of the death sentences passed on nine innocent Ogonis during the regime of General Sani Abacha in 1995, we demand the payment of compensation by Shell for the destruction of livelihoods by oil spills from the company's reckless oil mining business in Ogoniland since 1958, and an adequate funding for the cleanup and restoration of Ogoniland.

These demands are justifiable, legitimate and do conform with the ideals of the founding fathers of our country. We state categorically that as a people, we shall not compromise on our rights nor shall we relent on our demands for fairness and justice as contained in the Ogoni Bill of Rights.

This post is written by Fegalo Nsuke, publicly secretary of the Movement for the Survival of the Ogoni People (MOSOP). He wrote from Bori, Ogoniland.