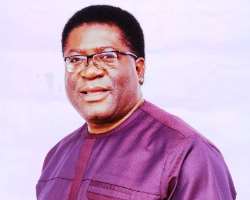 The Ireland trained Attorney made the assertion while interacting with newsmen in Owerri, the capital city of the State, describing him as eminently equipped with the needed leadership character and administrative acumen to re-launch the State on the path of development.

The fiery politician and business mogul averred that serious business of governance should not be left in the hands of mediocre and fun seekers who will end up compounding already sorry situation of the State.

He therefore called on the members of the party not to sell their conscience for paltry sums of money from their common wealth, saying that those who may yield are only brining curses upon themselves and their family.

On why he is throwing his weight behind Madumere, he said that Madumere is one of the few noble politicians whose leadership qualities are unequaled. His words: “As a loyal party man, to say the truth, Madumere has the acceptability and followership because of his untainted antecedents. He understands what leadership is all about with his strength of character. The man is humble, content and an all-round performer who will utilize Imo money and other resources to work for them. I can’t imagine myself falling for this nauseating idea of presenting a candidate who does not even understand himself; who lack self-control to be presented to the people of Imo State as APC flag bearer. We don’t want accomplices and those whose pasts are questionable. That is why we are supporting Madumere.”

Meanwhile, Nze Onuoha who hails from Isiala Mbano local government area in Okigwe zone of the State revealed that Okigwe zone will vote for Prince Madumere in the forthcoming APC direct primaries for good conscience and restoration of the dignity of the people.