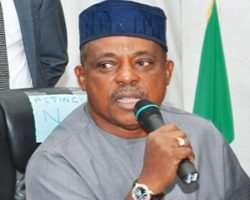 The Peoples Democratic Party has asked the Inspector-General of Police, Ibrahim Idris, to explain to Nigerians why he failed to withdraw policemen attached to the Governor of Osun State, Mr. Rauf Aregbesola, like he did to the Governor of Ekiti State, Mr. Ayodele Fayose, before the conduct of the Ekiti governorship election.

The party said that the conduct of the police under Idris had shown him to be a partial police boss who was merely interested in the ruling party.

The National Chaairman of the PDP, Prince Uche Secondus, who said this in an interview with our correspondent in Abuja on Friday, recalled that the IGP ordered that all policemen attached to Fayose be withdrawn before the governorship election which held on July 14, 2018.

He also asked Nigerians to remember that the police boss equally withdrew the policemen attached to the Governor of Anambra State, Willie Obiano, before the Anambra governorship election “in order to make him vulnerable just because he is not a member of the APC.”

Secondus said the police had claimed that the action in the two instances was to allow for the neutrality of the police in the conduct of the election.

He, therefore, wondered why the same thing had not been replicated in Osun State, saying the action of the police had confirmed the position of the PDP that it was a ploy to facilitate the rigging of the election against the PDP in Ekiti State.

He said, “By now, we thought that the IGP would have replaced all the policemen attached to Governor Aregbesola and the State Government House at Osogbo with new ones as he did in Ekiti State.

“Recall that the police also took away the security detail attached to Fayose. He was prone to attacks and all that. But what has happened to the policemen attached to Governor Aregbesola? Nothing. Instead of them being replaced, they have been fortified with policemen from Lagos State and neighbouring friendly states in order to manipulate the outcome of the election.

“We want IGP Idris to tell Nigerians why he is applying different rules in the deployment of policemen for the conduct of elections in states being controlled by the PDP and the one under the control of the All Progressives Congress.”

Secondus, however, appealed to members of the PDP in Osun State to guard their votes on Saturday (today) and make sure that they are not stolen.

He added, “Members of our party and others in the opposition must guard their votes and make sure that they are not stolen. They must be vigilant and be strong in the face of persecution. Osun people will never follow a government that has refused to pay salary for more than three years. PDP remains the viable alternative. – Punch