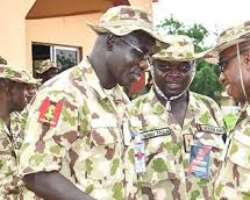 Alkali, former Chief of Administration, Army Headquarters, Abuja, was declared missing on the 3rd of September.

He was on his way to Bauchi after leaving Abuja in the morning.

Mohammed, who is the commander of the search and rescue operation, said that after thorough search and investigation, the army stumbled on some intelligence that made it necessary to search the water body. “In carrying out a directive from the Army headquarters, a thorough search was conducted, hospitals were visited, we searched everywhere.

“Based on credible intelligence, we had to come to this place and we have been here for the last one week.

“We are trying to find three things – an officer, Maj. Gen. Alkali (rtd), who is still missing, his vehicle, a black Toyota Corolla, and also ascertain whether Alkali is alive or not.

“We have credible information that some vehicles were pushed into this river and we have been here for the last three days trying to see if we can salvage something from the river.

“The river is a mining site and therefore very deep. We have used all options but as a last resort, we will evacuate the water from the pond to see what is in it,” he said.

Meanwhile, some 500 women clad in black, protested the evacuation of the water.

Mrs. Mary Yakubu, leader of the protesters, told the News Agency of Nigeria (NAN) that the water had been part of the community over time, adding that it had “a huge cultural significance”.

“If the water is evacuated, it could lead to the death of our sons and husbands,” she claimed.

But Gen. Mohammed, in a reaction, said that nothing would stop the army from evacuating the water.

“The only thing that can stop us is a directive from the Army Headquarters,” he declared.