JEGA AND CHALLENGES OF 2011 ELECTIONS 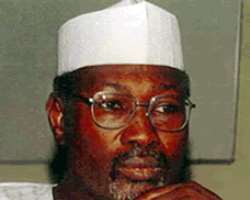 Jega
Since Nigeria's independencein1960,, elections have always been ridden with controversies, with the electoral commissions having to bear the brunt of the virile attacks from the polity.

Apart from the 1993 elections which were adjudged the freest and fairest, it is on record that no election conducted in the country has been devoid of irregularities and electoral malpractices. Coincidentally, no chairman of the commission besides Prof. Maurice Iwu, has ever conducted two successive general elections.

Controversial elections
But no electoral umpire has ever received so much bashing and condemnation both from within andoutsidethe as the Iwu-led Independent National Electoral Commission (INEC). The first election conducted by Iwu in 2003 was marred heavily with irregularities and electoral malpractices so much that long after the elections, petition tribunals across the country were flooded with several cases.

From Anambra to Edo to Ondo to Rivers and many of the states, aggrieved candidates dragged their opponents to these tribunals where election results were contested. For instance in Anambra State, INEC had declared that the candidate of the Peoples Democratic Party (PDP), in 2003, Dr. Chris Ngige had won the elections, but his opponent in the All Progressives Grand Alliance (APGA), Mr. Peter Obi contested the outcome of the elections in the courts, and three years after, the Supreme Court declared him the winner.

Cases like this were commonplace across the nation. There was the Agagu vs. Mimiko case in Ondo where after some years Mimiko was declared winner. The Osunbor vs. Oshiomhole case in Edo was another of such petitions where the incumbent governor was ordered to hand over power to his opponent. The most recent is the Emordi vs. Igbeke of the National Assembly, where after three years of legal battle, Igbeke was declared winner of the Senatorial elections of Anambra Central against Emordi who illegally occupied the seat for three years.

The clamour for electoral reforms
Iwu promised a better election, but in 2007, the exercise he conducted, according to international observers, were adjudged the worst in the history of the country. They were flawed with so much irregularities and massive rigging and this drew so much public outcry that shortly after President Umaru Yar'Adua was sworn in, he acknowledged that the elections that brought him into power was marred with malpractices, and promised that electoral reforms would be top on the agenda of his administration.

In fulfillment of his promise, the late Yar'Adua set up the Mohammed Uwais panel to review the electoral problems and point the wayforward. It was in Yar'Adua's era that the clamour for electoral reforms reached its crescendo. Nigerians had lost faith in the electoral commission and across the country; the quest for credible elections and overhaul of the electoral system was palpable.

When Goodluck Jonathan was sworn in as substantive President, he promised to carry on with his predecessor's electoral reforms and promised Nigerians that he would ensure that the country had credible elections in 2011 and he started by removing Iwu whom many accused ofbeing responsible for the irregular elections.

He took the drive for electoral reforms by signing a pact with the United States Government where the both countries committed themselves to ensuring free and fair polls.

In the same vein, 45 percent of the respondents do not believe that INEC can be transformed into a credible election monitoring body while 62 percent said they were not confident that INEC could run a free polls in 2011.

While some believed that Iwu's removal was the panacea to the electoral problems, others are of the view the solution lies in a total overhaul of the electoral system. Speaking to Daily Sun, President of the Campaign for Democracy, Dr. Joe Okeiz Odumakin, believes that the removal of Iwu was a step in the right direction, as it would pave the way for free and fair polls.

Her words: 'Jonathan should write his name in gold by ensuring that there is an overhaul of the electoral system and the removal of Iwu at the time it happened was a step in the right direction. The problem with our electoral system is corruption and if we can deal with it, then we are a step closer to getting a credible electoral system.'

Niyi Akintola (SAN) reiterated her stand. In his opinion, the removal of Iwu was long overdue. According to him, 'must Iwu wait to be asked to leave before he does so? I still recall the congratulatory letter he wrote when the late Yar'Adua assumed office, and after which Yar'Adua admitted that the election that brought him to power was flawed. That was enough to make Iwu to resign for the betterment of our electoral commission.'

Chief Olisa Agbakoba has a different view. Speaking with Daily Sun, he states that the problem does not lie with the umpire, but with the electoral system. His words: 'The problem of INEC is complex. It does not lie with Iwu, but it is the fact that we do not have sound electoral reforms that is why we are experiencing it. When the government gives us sound reforms, then we can start talking of credible elections.'

Attahiru Jega emerges
Amidst the intrigues and power-play that typify the nomination for a sensitive office like that of the INEC Chairman, President Jonathan had promised that the person that would be appointed would be someone who would be neutral and who has a high level of credibility. Amongst names that were touted in the media to be the likely candidate for the job were Agbakoba, Dora Akunyili, Attahiru Jega, Alfa Belgore, Ishola Williams, Emeka Anyaoku, and Col. Mohammmed Umar(rtd).

While the speculations and arguments of who was going to occupy the post raged on, Jonathan sprang a surprise when he was openly quoted as saying that he has never met the person whom he was going to appoint and has never at any time interacted with him. If he intended to keep people guessing by the statement, he certainly succeeded as names like that of the former executive secretary of the Human Rights Commission, Bukhari Bello suddenly cropped up as the most likely person to occupy the post and the speculations further increased.

But on June 8, 2010, the National Council of States formally approved the candidature of the Vice Chancellor of Bayero University, Kano, Professor Attahiru Jega as the new chairman of INEC. One of similarities that the incumbent INEC chairman has with predecessor is their academic status. Like Iwu, Jega is also a professor. He was the National President of the Academic Staff Union of Universities(ASUU) in 1992 while Iwu was his deputy.

But one thing that Jega has working for him is his antecedents . The role he played as the ASUU boss during the regime of former military president, Ibrahim Babangida will always be fresh in the memory of Nigerians.

In 1992, ASUU, led by Jega practically forced the IBB administration to sign the popular ASUU/FG agreement which sought to improve the welfare of university teachers.

The challenges ahead
Apart from the general elections held on June 12, 1993 which were adjudged the freest and fairest in the nation's history, Nigeria has most often been plagued with elections riddled with controversies and malpractices.

Most of the elections conducted from the inception of the democratic elections have not fared any better as they have been characterized by rigging, ballot snatching, disenfranchisement of voters and violence.

Oftentimes, after any major election has been held, election petition tribunals are flooded with complaints, and the country has in the past witnessed many cases where governors were ordered by the courts to vacate their postitions and hand over power to their opponent after it must have been proved that the election procedure that favored them was fraudulent.

In view of this, one of the major challenges that the new INEC chairman would contend with is the ability to conduct free and fair elections where the votes of the people will count. He will also has the duty of proving to Nigerians beyond reasonable doubt that he can withstand the pressure to manouvre election results to suit some powerful interests.