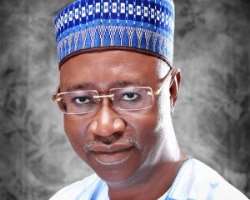 A 2019 gubernatorial Aspirant in Borno state, Matawalle Kashim Ibrahim Imam has said that as part of post insurgency projects and programmes, he intend to build in what Governor Kashim Shettima has done on the reconstruction, rehabilitation and resettlement processes by introducing free and compulsory education at the primary and secondary levels.

While at the tertiary level, his government if elected, will Introduce a comprehensive tertiary Institutions sponsorship for all Borno state indigenes , especially, the children of the IDPs, orphans and widows who are vulnerable including the most vulnerable in the society who are the physically challenged.

Matawalle who stated this in a press conference with journalists at his residence conference hall Tuesday added that as part of his agenda for the people of Borno, he will scrap the existing and controversial LGCs Joint Account and give the LGCs full autonomy to operate on their own as obtained in the last dispensation..

He also said that the poor health facilities and inadequacy will be a story of the past as free maternal healthcare will be introduced and hospitals will be upgraded and furnished with modern and sophisticated equipments and facilities.

The Aspirant further criticized the state revenue system and said that comparatively, Lagos generates N30 billion monthly while all the 19 northern states generate about N18 billion cumulatively but Borno state due to the insurgency and poor revenue collection machinery, it is the lowest in the country despite its revenue based sources locally and internationally.

He pledged to also carry out a comprehensive and massive reconstruction, rehabilitation and resettlement projects across the state through the constitution of a State Conference Committee and Charity Organization that will mobilized and raise funds locally, nationally and internationally for the state government to execute the massive RRR projects in every community affected by the insurgency across the state.

He however lamented on the high rate of killings, bombings and wanton destruction of public and private property across the state, stressing that, although, governments and organizations including humanitarian and development partners have done a lot but more need to be done transparently and honestly to ensure that the IDPs returns to their communities to continue their livelihood.

Imam noted that with the available agricultural implements, seedlings and other farming tools, more farming equipments will be provided to the rural farmers to produce more food for the state and country in collaboration with Lake Chad Basin Development Authority to create jobs for the jobless and unemployment for youths as well as boost the state economy.

Similarly, he said the abandoned industries in the state will be revived to provide employment to the teeming graduates and unemployed youths to alleviate the sufferings of the people through skills acquisition programmes.

He further said that he was in support of the indirect primaries that the state ruling party has adopted to use for the party primaries hence the national Secretariat gave every state the privilege to make its choice accordingly.

Matawalle added that his government will be an all inclusive type with professionals, technocrats, bureaucrats and academicians on board to guide the state agenda implementation while science and ICT will be prioritized in the school curricula

He however appreciated the efforts and concern of Governor Kashim Shettima and President Muhammadu Buhari as well as the Nigerian military in the fight against the Boko haram insurgency, noting that, without their support and commitment peace and harmony being enjoyed now in the state could not have been possible.