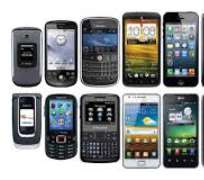 The Independent National Electoral Commission said it was not banning the use of smartphone around the polling unit areas, but the moment a prospective voter entered voting cubicle to cast his or her vote.

The Chief Press Secretary to INEC Chairman, Mr Rotimi Oyekanmi, made the declaration in an interview with the News Agency of Nigeria on Wednesday in Abuja.

He stated this while reacting to the statement issued by the National Chairman of the Peoples Democratic Party, Uche Secondus, condemning the decision of INEC to ban the use of smartphones at polling booths.

Oyekanmi said that Nigerians were fully aware of the challenge of vote-buying and selling that reared its ugly head in recent elections.

He said that had prompted many stakeholders to call on INEC to devise innovative ways to tackle the problem.

“In consultation with other stakeholders, the Commission came up with new measures to solve the problem, one of which is to disallow the use of smartphones and other electronic devices in the voting cubicles on election day.

“In other words, INEC is not banning phones around the polling unit area, but the ban takes effect from the moment a prospective voter collects his or her ballot paper and enters into the voting cubicle to thumbprint and thereafter drop the folded ballot paper into the ballot box.

“After that, the voter can have access to his or her phone.”

Oyekanmi urged Nigerians to disregard any attempt by any individual or group to politicise what was purely a preventive measure.

Secondus had, in a statement by his Media Adviser, Ike Abonyi, on Tuesday in Abuja, alleged that the decision was to perfect rigging formula for the ruling All Progressives.

He alleged that the INEC decision was also a deliberate plan to kill means of gathering evidence against rigging arrangements.

He advised voters not to sell their Permanent Voter Cards but use them judiciously to vote in all elections in 2019.