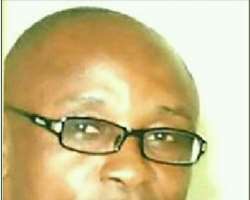 For the sake of professionalism and civility, I have stood by and watched the Press Secretary of the Governor of Imo State, Sam Onwuemeodo, in his tradition as a swine, continues to role in filth for obvious reason of nature.

However one tries hard to groom a pig, it will eternally remain a pig and will never depart from its habitat of filth.

I have watched Onwuemeodo thread even where Angels feared to thread. I cannot blame him because it shows how empty he is to the extent of challenging his chi to a wrestling match.

However Onwuemeodo may try, I cannot descend so low to join him in his idiocy and trade of ignoramus let alone joining such colourless common place personality with the Deputy Governor of Imo State, Prince Eze Madumere whose trail blazing make-up is there for anyone to see.

This shows that our Governor’s media manager is nothing but a past master of remarkable ineptitude in history. This can serve as a cogent reason he talks before he reasons, a medical condition that ought to have confined him in a custody for proper diagnosis. This may not be unconnected with his disinterestedness to research into a relationship that has spanned over two decades before wildly going on with his diatribe. It is even more worrisome to decipher that as the recorder and manager of Governor’s public outings, he has also failed to acknowledge Okorocha’s barrage of testimonies about his Deputy whom he had described variously as God sent, headache free, incorruptible, integrity personified and one whom I’m well pleased.

It is not in our character to join issues when there is nothing at stake. Governor’s image maker should be able to embark on little inquiry to know who Madumere was before and after he met his friend, Owelle Rochas Okorocha. It will also be imperative to ask from our Governor the contributions of Prince Eze Madumere towards realizing the dream of getting to where he is today.

Again, I have also realized that Onwuemeodo, a mere butterfly now prides himself a bird. Ordinarily what locus does Onwuemeodo have to begin to arrogate the power of querying his principal, the Deputy Governor, over his ambition? This is rather the height of insubordination for a mere incompetent press secretary who should ordinarily be sober at the mention of the office of the Deputy Governor. It shows the level of retardation in Onwuemeodo’s sense of reasoning, depicting lack of understanding of code of conduct in a supposed highly intellectual and administrative establishment. To say the least this is the height of breach of protocol.

From the forgoing, Onwemeodo ought not to have any business within and around the Government House of Imo State if we are not enthroning mediocrity and iberiberism borrowing from his Oga.

The latest of chains of unmitigated attacks against the number two citizen of the State was Governor Okorocha’s usual mockery and verbal blackmail alleging that his Deputy is so rich to have afforded N22.5 million for governorship nomination form.

While the Deputy Governor in his tradition of decorum will exercise restraints against joining issues with the Governor, such revelation shows how much the Office of the Deputy Governor has been so relegated. We therefore thank His Excellency, our Governor for telling the truth how Office of the Deputy Governor has been so raped to the frightening degree that the occupier of the office will be so impoverished to be unable to purchase a nomination form while his son-in-law, Uche Nwosu, a mere Chief of Staff Government House flew to and from Abuja in a private jet to purchase the same form with over one hundred appendages also flying to and from Abuja on board the commercial aircraft.

The Deputy Governor will never be envious of anyone showing off ‘wealth’, but let it be known that he is focused and more than determined, in his resolve, to give the needed leadership to restoring the dignity of Imo people. Prince Madumere’s Campaign Slogan is Journey of Grace and it is the people’s Movement.

Prince Madumere at various occasions had pointed out that, God has continually shown him grace and handled his challenges at every point in time through the great people of Imo State. God alone gives power.

I wish to remind Governor’s Hallelujah singers that no amount of intimidation, blackmail, verbal attacks will break Madumere into dropping his stance against draconian policies, inequity and injustice to the people of Imo State.

It is only appropriate to remind insensible belligerent Onwuemeodo that the man who picked him up from his devastated life of penury was this same Madumere. The same Madumere it was who made Onwuemeodo press secretary to the Governor. In Deputy Governor’s character, he does not help anyone to be praised but we are taken aback for Onwuemeodo’s incompetence and unprofessionalism. He is nonetheless a bundle of disappointment to even his supposed professional colleagues. May I remind Onwuemeodo that he is nothing but a mere burning grasshopper that mistakes its spilling oil for good health not knowing he is heading for destruction.

While people like us do not merry in Onwuemeodo’s life of perfidy, it is even more disturbing that he glories in his pitiable status of a mere cannon fodder.