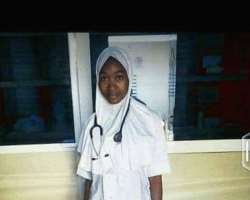 The United States government on Monday condemned the killing of a female aid worker abducted in the northeast.

Saifura Hussaini Ahmed Khorsa, 25, was kidnapped by suspected Boko Haram militants in March this year alongside two other ICRC aid workers during an attack on a military facility.

At least three Nigerian aid workers were killed and three others were injured in the attack.

The United States Embassy in Abuja discribed it as a ‘senseless murder’ . ” We utterly condemn this heinous and inhuman act and stand in solidarity with the ICRC and all those who work in service with the Nigerian people.”

“Midwife Saifura Hussaini Ahmed Khorsa was providing care to those most vulnerable. This was a senseless murder. Our thoughts and prayers go out to her family, and to her colleagues, and to those still suffering in captivity.”

Khorsa was working in the UNICEF clinic in Rann with internally displaced people in a remote town outside Maiduguri, in Nigeria’s troubled north east region.