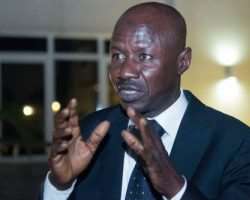 Ekiti State governor, Ayodele Fayose has slammed the Economic and Financial Crimes Commission for instructing the Nigeria Customs Service,  to monitor and arrest him anytim e he wants to run away from the country.

For Fayose the instruction is petty and politically motivated as he had earlier indicated on his on volition to make himself available to the anti-graft agency for interview a day after the expiration of his tenure on October 15.

The EFCC had in a letter signed by its acting chairman, Ibrahim Magu, to the comptroller-general of customs urged the Service to place him on the watch list and ensure he does not escape.

Fayose who enjoys immunity from prosecution as a governor is set to appear before the EFCC on October 16 over allegation of money laundering, conspiracy, abuse of office, among others.

Fayose said 'putting him on the watchlist was not only political but petty. He maintained that he would remain with PDP no matter the action taken against him.

He tweeted, “@officialEFCC, should note that when a woman is being brought to you as a wife, you don't have to peep through the window to see her. As I said in my letter, Insah Allah, I will be in your office on October 16, a day after the expiration of my tenure.

“@officialEFCC Putting my name on watchlist after receiving notification of my coming is not only political but petty. I'm not among those who are afraid to face tomorrow. Nobody is God.

“They should expect me on October 16 by 1pm.
“Whatever they do, I will remain in PDP.”