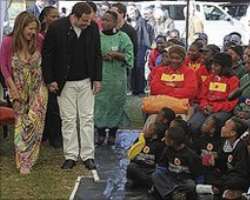 Hollywood actor John Travolta has donated 70,000 rand (£6,300) to the Nelson Mandela Children's Fund during a visit to South Africa.

The film star met children the foundation has supported and sang and danced with them.

Travolta, his wife Kelly Preston and his daughter Ella are staying in the country for a few days.

His 16-year-old son Jett died in the Bahamas last year. Jett, who had Kawasaki disease – which causes inflammation of the blood vessels in young children- suffered a fatal seizure at the family's holiday home.

Mandela set up the fund to provide a variety of services for children, including support for street children and the children of refugees.

Its plans include a children's hospital to be built in Johannesburg.

A recorded message from Mandela was played at Saturday's event. He urged people to protect society's “most valued asset, its children”.

Travolta urged other stars to use their status to contribute to Mandela's legacy.