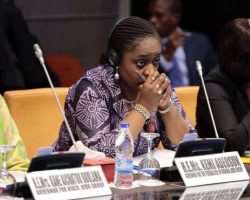 The Minister of Finance, Kemi Adeosun, who has been a subject of controversy surrounding her exemption certificate from the National Youth Serve Corps programme, has finally resigned.

A report by an online media had detailed how the minister who was born abroad where she was said to have graduated at age of 22 evaded participation in the youth programme which was initiated in 1973 by then government of Yakubu Gowon to foster unity among the diverse peoples and tribes in Nigeria.

News Agency of Nigeria reports that although no official statement has been released on the issue, reliable sources confirmed her resignation on Friday.

The 51-year-old former minister is reported to have resigned following pressure arising from her questionable NYSC discharge certificate.

In November 2015, Adeosun was appointed Nigeria's Minister of Finance by President Muhammadu Buhari.

Kemi was born in 1967 in London, England to Nigerian parents from Ogun State.

The story has been out there that Adeosun forged her National Youth Service Corps (NYSC) discharge certificate.

Although she was above 30 when she returned to Nigeria, she was not qualified to obtain an exemption because she got her first degree when she was in her 20s.

The fake exemption certificate that she obtained through a third party was what caused her fall.

She initially ignored the forgery report, but her handlers later explained that she was not guilty.

They painted those digging into the story as mischief-makers who wanted to pull down a woman of substance.

The NYSC headquarters also came up with a terse statement that she indeed applied for an exemption and that it was looking into the matter.

Some citizens had dragged her to the Federal High Court in Abuja which has fixed October 8 to hear the suit asking it to sack her from office.

The suit was filed by a Mr. Francis Obalim, a lawyer who approached the court, praying for an order quashing and setting aside Mrs. Adeosun's appointment as a Minister of the Federal Republic of Nigeria,

Her appointment, he said, circumvented the condition precedent and in contravention of mandatory Sections 12, 13 and 14 of the NYSC Act which is an integral part of the 1999 Constitution, as amended.

The news of her resignation burst the social media, recording more than 15,000 tweets one hour after.

Dr. Joe Abah‏Verified account @DrJoeAbah tweeted: “I have just received, with sadness, news that Kemi Adeosun has resigned. She is a talented, courageous woman who drove a lot of important reforms as Minister of Finance. However, the NYSC saga had made her position untenable & the situation was only going to go from bad to worse.''

Some people have praised her as one of the few Nigerians that have dared to resign from office.

“This is the first time in the history of Nigeria a minister or a leader will take a bold step to write a resignation letter because of forgery allegation.''