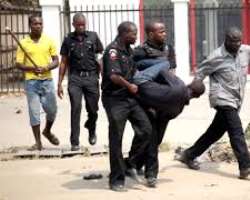 The Commissioner of Police in Imo, Mr Dasuki Galadanchi, said on Thursday in Owerri that the command had arrested two suspects involved in the killing of a Rev. Fr, Jude Egbom.

The News Agency of Nigeria (NAN) reports that until his death, Egbom was the parish priest of St Patrick Catholic Church, Amucha in Njaba Local Government Area (LGA) of the state.

It will be recalled that the hoodlums barged into a salon in Nkwere Local Government Council where the priest was barbing his hair and killed him on Sept. 10.

The commissioner, who paraded the suspects on Thursday, gave their names as Chigozie Uzoukwu and Peter Boniface.

Also, Galadanchi paraded two other suspects who stole a corpse from O-Jesus Mortuary, Akabo and demanded for N5 million ransom. He explained that the criminals were arrested in a forest in Mbaitoli LGA on Sept. 12, after keeping the corpse for many days.

The names of the suspects were given as Chukwudi Chukwu and Bethel Ibe.

In their separate reactions, Bethel Ibe, a commercial bus driver, said he was lured into kidnapping by his friends.

He said they decided to steal the corpse to raise money for what he called a mega business.

His co-suspect, Chukwudi Chukwu, said he was an ex-mortuary attendant and was sacked by management of O-Jesus mortuary.

He said that based on his experience in mortuary business, he was able to steal the corpse.