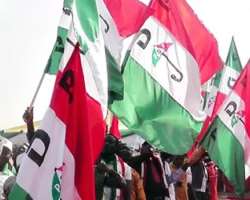 The Anambra Police Command on Wednesday sealed the State Secretariat of the Peoples Democratic Party (PDP) located at Udoka Estate in Awka.

Mr Haruna Mohammed, the command Police Public Relations Officer (PPRO), said the sealing of the secretariat was due to fracas that erupted earlier in the day and avert further breakdown of law and order.

Mohammed added that the state had been peaceful over time and the police would not allow anybody to jeopardise the relative peaceful situation prevalent in the state under whatever cover.

“The police would take control of the area until when normalcy returns,” he said.

The PPRO denied the allegation that some of the protesters and their supporters were brutalised by thugs and some policemen.

Mr Ndubuisi Durkins, Assistant Legal Adviser of the party, who led the protest, had claimed that some of their members were injured.

He said the cause of their action was the imposition of a caretaker leadership on them by the national hierarchy of the party, in spite of a substantive court judgment that annulled the arrangement.

The protesters alleged that the chairman of the caretaker committee, Ndubuisi Nwobu, was a sellout who abandoned their collective struggle for what they called selfish and pecuniary interests.

Before the police took over the premises, it was gathered that the caretaker committee members had allegedly broken the secretariat gate to gain entrance for a meeting.

Addressing reporters, Mr Ndubuisi Nwobu, the caretaker chairman described the protest as a plan by the opposition to sabotage PDP chances in the 2019 general elections in Anambra.

He alleged that a senatorial aspirant on the platform of the All Progressives Grand Alliance (APGA) sponsored the protesters. (NAN)