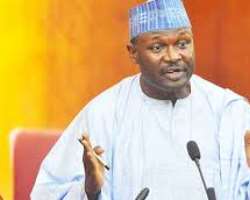 The Independent National Electoral Commission (INEC) said on Wednesday that it has no plan to postpone the 2019 general elections as reported in the media.

The Chief Press Secretary to INEC Chairman, Mr Rotimi Oyekanmi, in a statement he issued in Abuja said the clarification became necessary following a story with the headline, “We may shift 2019 polls over threat of violence – INEC.”

The publication, according to Oyekanmi, does not portray the correct reflection of what INEC Chairman, Prof. Mahmood Yakubu, said at the Inter-agency Consultative Committee on Election Security meeting in Abuja on Tuesday.

Oyekanmi said what Yakubu told the security chiefs at the meeting was that as the 2019 general elections drew close; the committee would need to meet more frequently.

This, according to him, is to constantly assess the security situation across the country and take proactive actions to forestall any unpleasant event before, during and after the elections.

“He underscored the fact that elections cannot be conducted under a rancorous atmosphere.

“He referred to Section 26 of the Electoral Act which, among others, gives the commission the power to postpone an election if there is reason to believe that a serious breach of peace is likely to occur if the election is proceeded with on (the fixed date)”, or as a result of natural disasters or other emergencies,“ Oyekanmi.

He said Yakubu made the reference to the Electoral Act only to underscore the importance of having peace and order in place before, during and after elections.

Oyekanmi also said that the INEC chairman's reference was to emphasise the significance of the synergy between the commission and security agencies.

He added that Yakubu also noted that the most important assignment before the commission was the Osun governorship election.

“INEC boss added that the Osun Resident Electoral Commissioner, Mr Segun Agbaje and Commissioner of Police in the state, Mr Fimihan Adeoye, would brief the committee on the current situation in the state.

The Chief Press Secretary said that Yakubu said the two officers would also brief the committee on the readiness for the governorship poll, which he said that they did.

“Besides, Yakubu spoke on the rising phenomenon of vote buying and selling and harped on the need for collaborative effort to decisively tackle the menace and prevent it during the Osun governorship election.

“He said a Code of Conduct for security agents would be enforced during the elections and warned that any activity outside the confines of legality/ legitimacy will be viewed seriously.”

Oyekanmi said that the INEC chairman also seized the opportunity to draw the committee's attention to a certain video clip.

According to him, in the video, some political actors were seen making inciteful statements that could lead to serious security breaches before, during and after the 2019 general elections.

He added that Yakubu also called on the relevant security agencies to be vigilant, just as he urged them to take immediate action on the development.

“It is thus clear that at no point during his remarks did the INEC chairman allude to the notion that the commission “may shift 2019 polls over threat of violence” as reported by the national newspaper.

To be sure, INEC has no plan to postpone the 2019 General Elections,” Oyekanmi said