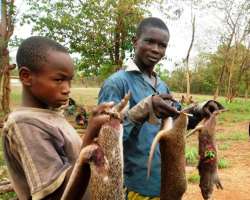 Introduction
Who could ever imaginethis link between climate change and meat consumption?Climate change is one of the greatest security issues faced by common man in the 21st Century. It is a transnational threat whose effects respects no boundaries or territorial sovereignty. It manifests in the form of shifting weather patterns that threaten food production, rising sea levels that causes floods, droughts, mudslides and hurricanes.

Despite the devastating effects of climate change, the issue was received warmly by states as it was not fully recognized as a fundamental security threat but over the years, it has become a major discourse at the international, Regional and National levels. New debates have been generated on this issue, it has led to the adoption of key instruments like the United Nations Framework Convention on Climate Change (UNFCCC) in 1992, as a first step in addressing climate change. It has also inspired major declarations. The High Representative for Foreign Affairs and Security Policy Federica Mogherino emphasized at the event “Climate, Peace and Security: The Time for Action” that, “…sustainable peace needs climate Action…So let’s keep this in mind: when we invest in the fight against climate change, we invest in our own security.”NASA defines climate change as “a broad range of global phenomenon created predominantly by burning fossil fuels, which add heat-trapping gases to the Earth’s Atmosphere.” Among several factors associated with climate change, is meat consumption. This includes meat in all forms, eggs and other dairy products.

The Link Between Climate Change and Meat Production/ Consumption

Meat production comes through organic farming which is a system of farming that relies on fertilizers of organic origin. Meat is also produced through Free-range farming which is a method of animal husbandry where animals can roam freely outdoors, hunting and fishing.

Meat consumption has led to an increase in meat production, which causes pollution through the burning of Fossil fuels, that are formed by natural processes like the decomposition of dead organisms. These Fossil fuels contain elevated levels of carbondioxideand petroleum. Shindell Drew in 2013 held that, the burning of fossil fuels produces around 21.3 Billion (gigatonnes) of carbondioxides per year. This is a green house gas that increases radiative forcing and contributes to global warming. Meat production also leads to the production of animal methane, effluent waste, water and land consumption.

Bryan Walsh indicated in 2013 that, livestock production has a bigger impact on the planet than anything else. This is because about 30% of the world’s surface is used not to cultivate grains, fruits and vegetables for human consumption but, to support chicken, pigs, cattle and all that we eat. He further explains that, the production of livestock also uses one-third of the world’s fresh water. Statistics from the International Research Institute in Kenya, the Commonwealth Scientific and Industrial Research Organization in Australia and the International Institute for Applied Systems Analysis in Austria reveals that, livestock in Africa is mostly grazed on grasslands whereby about 50 million tonnes of grain are eaten a year. This is also substituted by grass and crop residue.

Walsh also holds that, the highest total livestock-related green house emissions come from developing countries which account for 75% of global emissions from cattle and 56% of global emissions from poultry. This is a similar case in all developing countries including Cameroon.Scientists from the University of Oviedo averred that, egg production has serious impacts like ozone depletion (Mostly from the transportation of eggs), terrestrial acidification, human toxity and land occupation.

In Cameroon like any other African Country, the consumption of meat and dairy products is very high yet, the quality of feed used in feeding animals is very poor. Here, animals eat ten times more fed just to produce a kilogram of protein. Each Kilogram of protein produced by these animals contain 1000 kilograms of carbon in the from of methane from manure. Animal production in Cameroon, has also influenced deforestation, to create pasture land.

Statistics on the Production and Consumption of meat and Dairy products in Cameroon (1967 to 2016) and Climate Change Nexus.

The high level of meat production and consumption in Cameroon has also heightened climate change. This increase also indicates the significant increase in the tonnes of carbondioxide produced from fossil fuels. Large scale meat production in Cameroon is also accompanied by the overuse of antibiotics which poses a serious threat to the health of Cameroonians. In addition, farmers practice free range farming where animals are allowed to roam freely. As a result, so many crops and plants are destroyed, which could even absorb the tonnes of carbondioxide released in the atmosphere. Most nomadic societies in Cameroon especially the Northern Regions of the country as well as other major towns and cities are currently facing water crisis. Since 2017, Cameroon has experienced 3 floods in Bafut (early 2018) Limbe and Douala (August 2018) and 2 Mudslides in Ndian Division (2017) and Limbe (August 24 2018).

A Way Forward
Reducing the consumption of meat and dairy products in Cameroon, can also lead to a fall in their level of it’s production and therefore, a positive future for climate change. This can be done by sensitizing citizens on substitutes of proteins like mushrooms and soya beans milk, with almost the same nutritive value. Another way forward is to advocate for the improvement of Animal diets in Cameroon, by farmers. Besides, they can also be trained on the easiest and cheapest ways of improving animal diets. Finally, the planting of trees should be encouraged especially in nomadic societies and coastal cities in Cameroon, in a bit to reduce the high levels of carbondioxide in the atmosphere.

Conclusion
From the statistics on meat and dairy production and consumption in Cameroon and the average annual increase rate, one can imagine the tonnes of carbondioxide produced in the Country every year and its short and long- term effects on climate change. This is a fundamental issue that needs urgent attention. I hereby urge the Government of Cameroon, National, regional and international organizations and Agencies, to take immediate Action. This is in a bit to reduce the cost of tackling this problem and also to reduce the threat levels that can be generated in the country in some years to come.