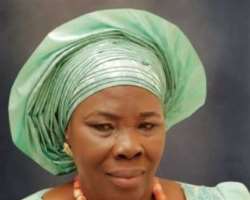 Bayelsans in Abuja have expressed deep sympathy to Governor Henry Seriake Dickson over the demise of his mother, Late Mrs. Goldcoast Dickson, even as they laud the Governor's proposed cancer foundation in her honour.

The Bayelsans, under the aegis of Association of Bayelsa State Indigenes in Abuja (ABSIA), described the death of Mrs. Goldcoast as painful not only to her family, her son, Governor Dickson, entire families in Toruorua and Angiama, but also to the state and associates of the governor.

President of the association, Mr. Ebielador Solomon Barry expressed the condolences on behalf of its members in an interview with this reporter.

The association said that the birth of Late Mrs. Goldcoast 72 years ago, was God's blessing to her family and Bayelsa State, stating that it was through her that Henry Seriake Dickson was born as a Bayelsan, and became a governor who has put the state on the fast lane of development in terms of major physical infrastructures.

"It is however unfortunate that that she died when her son and state needed her wise counsels most, especially on human relationships, which is the hallmark of progress in every society.

" We have lost her, but God knows best. We Bayelsans in Abuja, the Federal Capital Territory (FCT), under the umbrella of ABSIA, wish to use this medium to passionately commiserate with the Governor and his family and other children of the deceased over the great loss", President of the body, Mr. Ebielador stated.

He added that Mrs. Goldcoast was mother of the whole state, noting that despite her death at a somewhat good age, her loss was irreplaceable. The ABSIA, implored the Governor and the entire Dickson family, to repose their fate in God, over the incident.

President of the ABSIA, Mr. Ebielador Solomon Barry, made the commendation while expressing the organisations heartfelt condolences to the governor, in an interview with this reporter.

The association said: "The proposal by the governor to set up a foundation to not only immortalise his mother but to also render services to the needy, is a welcomed development".

It further stated that the cancer centre would be helpful to Bayelsans, especially the poor ones who cannot afford cancer screenings and treatments abroad.

According to Mr. Ebielador, the group's leader, the Goldcoast Cancer Foundation though a private initiative, when established, would create opportunities for medical tourism in the state, given also the state-of-the art diagnostic centre and the Melford Okilo Memorial Hospital owned by the state government.

The association expressed the hope that Governor Dickson is a man of his words, and urged him to establish the proposed cancer. It called on friends and associates of the governor and those of his siblings to support the proposed cancer centre project.

It will be recalled that the Governor in his period of bereavement, had announced his desire to establish a cancer foundation in honour of his beloved late mother.

Governor Dickson stated that the foundation will create awareness about the deadly disease as well as screen and treat patients.