Spending 16.67 B On Election Is Heartless , Omisore Tells Aregbesola. 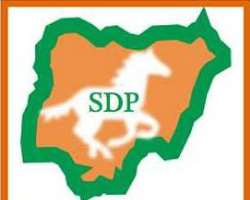 The gubernatorial candidate of the Social Democratic party senator Iyiola Omisore has described as height of wickedness for a government that has been unable to pay its workforce to propose to spend a humongous amount of 16.67 billion on election just to perpetrate itself in power.

The money was clandestinely released to Osun State government from the last tranche of the Paris Club recently according to a release by Idowu Afolami Secretary Labour/ CLO of Social Democratic party SDP.

now that he's in possession of such humongous money.

He admonished the governor not to waste such money on election but to put it to a better use.

"It's little wonder how a governor that has not been able pay salaries and other benefits of the workers for the past three years has been able to spend over #2billion on posters and billboards alone just to install his stooge in government".

He described the time of the release of such money to Osun State by as wrong saying the governor is a spendthrift who will waste no time to waste the money.

He stated further that releasing such money to Osun State alone out of the 36 States of the federation further raised high suspicion that the money was released to him to prosecute the coming election.

Senator Omisore urged the governor to put the money into a judicious use in order to ameliorate the suffering of the people of the state.

"This government knows that it has failed the masses and unabled to deliver on its promises to them , hence the result to heavily monetised the coming election

He therefore called on INEC and security agencies saddled with the responsibilities of conducting free and fair elections not to compromise in the coming election in the state, urging the citizens of the state to be abreast of this shenanigans by Aregbesola' s government.

.
Other governors are said to be miffed at the mode of releasing the money the humongous amount released and why singling out Osun for such release especially in this period.