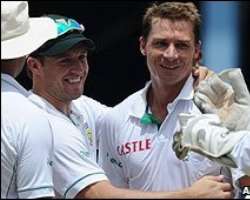 South Africa wrapped up the first Test against West Indies late on the fourth day with a 163-run win in Trinidad.

The tourists declared on 206-4 after 18.3 overs of batting in the morning, Graeme Smith missing an attempted sweep on 90 to be bowled by Sulieman Benn.

That left the Windies needing 457 to win, a small matter of 355 more than they had managed in the first innings.

Two wickets down at lunch, and 139-4 at tea, West Indies were bowled out for 293 with nine minutes left in the day.

And after some bold blows, and near misses, the final wicket came when Pascal aimed a flamboyant pull against Dale Steyn (3-65), only to chop the ball onto his stumps.

Despite the big margin of victory, it had been a tough day's work for South Africa's bowlers who had to work much harder for their wickets than they had on Saturday.

Finally, Chanderpaul edged Jacques Kallis low to second slip and Gayle was trapped lbw by Morne Morkel as he missed an attempted drive, falling for 73.

After tea, wickets began to fall more quickly until Benn (42) and debutant Shane Shillingford (27) added an enterprising 66 for the eighth wicket.

But when Alviro Petersen was given an exploratory over, he struck immediately, trapping Benn lbw. Paul Harris then ended Shillingford's stay, leaving Steyn (8-94 in the match) to supply the coup de grace.