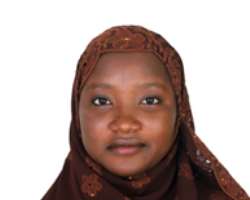 ’Ya Mace or ‘The Girl-Child’ by Safiyya Jibril has won this year’s BBC Hausa Short Story Writing Contest for Women. Safiyya is a 29 year-old secondary school teacher studying for her Master’s degree in Soil Science at the Ahmadu Bello University, Zaria, northern Nigeria.

The story highlights the ordeal of Halima, who going by family tradition, is expected get married at about 14 years old. But Halima is unmarried at 17, and comes under severe family and societal pressure. She settles for a man called Garba, someone she barely knows. Shortly after the honeymoon, Halima became the subject of constant physical and verbal abuse and the marriage ended in divorce.

But her father would not accept her back – he beats her and tells other family members not to take her in. Halima takes control of her life by deciding to live on her own instead of going back to Garba; she rents a room and takes up menial jobs to support herself. But the landlord soon discovers she is single and decides to evict her from his house.

Bilkisu Yusuf Ali, a member of the judging panel says:

“Safiyya’s story was selected from a shortlist of 25 because from the beginning to the end, it takes the reader to a climax brimming with tension, suspense and conflict.”

Safiyya Jibril says:
“When I was told about victory, I looked at my phone again to make sure I was not dreaming. Words cannot express how overwhelmed I am.”

Sunanmu Daya or ‘Birds of a Feather’ by Sakina Lawal and Zaina (named after the main character) by Bilkisu Muhammad Abubakar were also announced as first and second runners-up respectively, while twelve other stories were highly commended.

In its third year, the contest was introduced to give female writers a platform to tell and share their stories.

Editor of the Hausa Service, Jimeh Saleh says:
“The competition has truly lived up to its billing of giving women a voice in a male-dominated society. The quality of entries has improved remarkably over the last two years and women are becoming more daring in the themes they tackle.”

“We are delighted about this year’s competition and the active participation of women in telling their stories to the world. This year’s winner courageously brings to fore a challenge many women face and it’s great that her work is getting the recognition it deserves.”

BBC Hausa audiences will have the opportunity to listen to the stories in the coming weeks.

The winner and runners up will be given their prizes at the end of October.