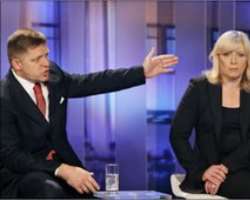 The Slovak Prime Minister, Robert Fico, has been asked to form a government, despite an opposition coalition winning more seats in Saturday's elections.

Mr Fico's left-leaning Smer party emerged as the largest single party with 34.8% of the vote.

A grouping of four centre-right parties won a majority of 79 out of 150 seats in the new parliament.

But President Ivan Gasparovic said he would give Mr Fico the first chance to form a government.

Mr Gasparovic said he wanted to respect the tradition of giving the leader of the largest party the first chance to form a new government.

Smer will have 62 seats in the new parliament. Its junior partner in government, the ultranationalist Slovak National Party, won nine seats, or 5.1% of the vote.

That gives Mr Fico's coalition a total of 71 seats.

Referring to his party's 62 seats, he said: “This is a number that gives us the right to accept a mandate from the president to form a cabinet. We are ready for that.”

Turnout in the election was 58.7%.
'Manipulated' poll
The liberal SDKU, the largest of the centre-right parties, has an austerity programme to tackle the effects of the global economic crisis on Slovakia.

“The main challenge for Slovakia is to stop the increase of the debt, to start economic development – Slovakia was once called the European tiger and we need to recover that,” said SDKU leader Iveta Radicova, who could now become the country's first woman prime minister.

“The citizens of Slovakia have voted for responsibility,” she added.

With partners Freedom and Solidarity, the Christian Democrats and an ethnic Hungarian party Most-Hid, her party has enough seats for a parliamentary majority.

Mr Fico had to battle allegations of sleaze during the election campaign.

Earlier this month, a national newspaper published what it said was a recording of Mr Fico discussing improper party fund-raising.

Mr Fico said the audio was fake and is suing the SME daily's editor-in-chief.

In a television address shortly before polls opened, Mr Fico said that thanks to the underhand practices of his political opponents, the election would be undemocratic and manipulated.

“Any mash-up is better than Fico,” said SaS leader Richard Sulik, saying his party would consider any coalition which would unseat the current prime minister.