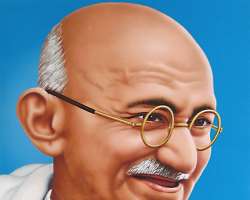 The reason India’s Dalits hate Gandhi is that, to the Dalits, he helped preserve the caste system, or Varna, in post independence India.

To understand India you must understand caste, or what the real word is for this religious practice, Varna. To start with in the Indian language of Sanskrit, Varna literally translates into the word “color”. Your varna, your color, determines your status in society, something that under the belief in reincarnation is determined by your actions in a previous life.

Under the system of Varna if you are from one of the Dalit “castes”, let say the very lowest status or “untouchables” it is because you are being punished by God for sins in a previous life in your present reincarnation.

Under Hindu religious beliefs, those of the lowest, mainly darker, Varna, have a religious duty to obey and serve those in the “high castes”, mainly lighter skinned Brahmins/Priests, the Kashatrya/Warriors or the Vaishas/Merchants like Gandhi, a distinctly “upper caste” name.

If you are an untouchable, say, forced to clean the public toilets, you are breaking “Gods Will” if you rebel against this status, something that will be enforced on your children after you and their childen after them. Accept your varna, be a good servant to the high castes and you will be reborn someday as one of them, or so goes Hinduism.

The practice of Varna is the only religious practice that all Hindus adhere to with a multitude of gods, worship services and holy books being observed throughout Hinduism. There is no Bible, Torah or Koran in Hinduism rather a multitude of day to day practices in many ways completely different in various Hindu communities across India.

Only Varna, “color”, is practiced by all Hindus. To this day this religious practice is observed by most Hindus with

even as many as 80% of Dalits believing in Varna.
Dalits call themselves Dalits because they reject what they have been historically called, “untouchables”, though most other oppressed peoples in India are included in the title. The word comes from the “dal”, crushed lentils, that is India’s staple food, as in a crushed and broken people.

Most of the leadership of India’s Dalit community see Gandhi as the main force in preserving the practice of Varna in post independence India for his opposition to reserved voting rights for India’s Dalits in India’s post independence constitution. This means all castes can vote for the elected Dalit leaders, for those seats in the Indian Parliament reserved for “minorities”.

Dalits believe that if only Dalits could vote for Dalit leaders than a more truly representative selection would take place. This is where Gandhi drew the line, that allowing Dalits to chose their own leaders directly was not to be allowed, and he went on his famous hunger strike to the death to prevent this from happening.

The Dalits leader, Dr. Ambedkar, finally gave in, accepted Gandhi’s demand and Dalits lost the right to directly chose their own leaders. This loss of choice is what Dalit leaders say is what is most responsible for preserving Varna in India after independence. Without Dalit leaders chosen directly by Dalits there has been no one to fight for Dalit rights by the effective outlawing of varna through the enforcement of the Indian Constitution authored by the Dalit leader Dr. Ambedkar, or so most Dalit leaders will tell you. After over a half century of independence India’s Constitution is still not being enforced with only a fraction of positions reserved for Dalits in employment and education being filled.

One thing is for sure and that is caste/varna is king in India’s almost half a million villages where caste infested Hindus dominate society and Dalits are forced into the most menial and degrading professions. Even drinking water from the wells reserved for caste infested Hindus is forbidden.

Most Dalit’s lives in post-Gandhi India remain one of misery and hardship with basic education for their children still just a dream. Being unable to even chose their own leaders directly through reserved voting and with Gandhi playing such a pivotal role in this happening is the reason India’s Dalits hate Mohandas Gandhi.

In a previous life Thomas C. Mountain was the Publisher of the Ambedkar Journal on India’s Dalits or Black Untouchables, founded in 1996. Today he is an independent journalist in Eritrea living and reporting from here since 2006.