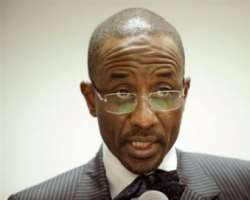 
ABUJA, June 13, (THEWILL) - The Nigeria Labour Congress (NLC) has called on the Federal Government to disregard the comment attributed to the Governor of the Central Bank of Nigeria (CBN), Mallam Sanusi Lamido Sanusi, calling on the central government to remove subsidies on petroleum products.

The NLC said recent media reports quoted Mallam Sanusi Lamido as counselling government to take this clearly unpopular step because he feels the beneficiaries of the existing subsidy regime are members of an oil cabal and not majority of our people for whom subsidy was put in place, the statement from the labour said.

It however noted that Congress would not have bordered to respond to such a call since its position on subsidy, in particular and deregulation, generally, is well known, but a comment from the Governor of the Central Bank, which basically, is a key artery in economic and fiscal policies of the nation, and particularly from someone of Mallam Sanusi’s pedigree, commands response in order to put things in their proper perspective.

"Why the NLC has consistently opposed the twin policies of removal of subsidy and deregulation over the years is principally because the arguments usually advanced by government only take cognisance of market fundamentals without due regard to the social and economic implications on majority of Nigerians, the supposed target of subsidy. We see Mallam Sanusi’s call, unfortunately, in the same light".

The Central Labour organisation said Sanusi perhaps might be concerned with the question of the huge resources that he claimed is being ‘wasted’ on subsidy but it is obvious that his concern is misdirected as he failed to connect the ‘wasted subsidy money’ to the failure of governance and irresponsible leadership.

The NLC believes that it is an admission of failure or complicity of government if it consistently pushes the argument that a major economic policy such as subsidy is being sabotaged without the same government not seen to have taken any step to arrest such criminality, remarking that in a civilised society, governed by laws and codes of moral decency, these shortcomings are sufficient for such a government to resign if it openly admits that it is incapable of handling certain miscreants (no matter how highly placed) manipulating a core policy against the overall national interest.

The NLC also said it believes and strongly too that Mallam Sanusi has a strong character, the competence and above all the integrity and patriotism to engage the cabal or mafia in the banking sector that have recklessly used shareholders and depositors’ money as they wished, adding that in the light of Mallam Sanusi’s call to remove subsidy because of an oil cabal, it would have been, therefore, logical for him to have allowed depositors to bear the burden of the criminal appropriation of their capital.

"We believe that what we need in the oil sector is the will, commitment and courage on the part of government to frontally confront the numerous challenges in the oil sector, the greatest of which is corruption. It is for this reason that the National Executive Council (NEC) of Congress resolved in its emergency meeting on December 15, 2009 that it will not accept increase in the prices of petroleum products in the name of deregulation; although Congress NEC acknowledged the urgent need for reform in the sector," the statement further said.