2019  decalogue For The Next Governor Of Imo State 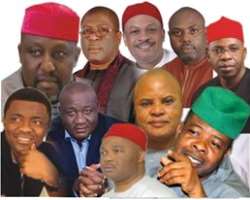 In the words of Walter Lippmann, “The final test of a leader is that he leaves behind him in other men the conviction and the will to carry on.” This will to carry on is informed by the ability of the leader to be a faithful follower too; because you cannot be a leader, and ask other people to follow you, unless you know how to follow leaders too. Therefore, this Decalogue is necessary if actually Imolites will have peace and decent dividend of democracy in 2019 to 2023. The Decalogue are:

1. The Governor should bring some new youths in focus, the focal point of his agenda that needs to empower some competent and qualified youths into crucial appointive leadership positions. This has great advantages. First, it will turn away the State’s old focus on clique, cronies and godfathers. Second, like what Obasanjo and Jonathan did during their regimes, the introduction of the likes of Professors Charles Soludo and late Dora Akunyili, etc., drawn into appointive positions as exemplary, it would show a new face approach to administrative efficiency. Third, it makes for successorship. This is good as success without successor is a failure, and as John Maxwell said, a “leader is great not because of his or her power but because he/she is able to empower others.”

2. Action orientation is the mark of the superior executive. The next state chief executive should undertake most projects which possibility of completion will not exceed two to four years. This is because our people have been accustomed to not only short-term projects but to ad hoc ones. Again, it will permit his administration to award or begin a project that will be thoroughly supervised, executed and fast accomplished. Above all, it will make him a great man of his words, focused and determined.

3. The youth are effective-continuity hope of every human society and their proper education is the singular assurance for a brighter tomorrow. As a matter of urgency and priority, the State leadership should evaluate and take up the problems in the educational sector. The government should appraise or if possible declare a state of emergency on the educational sector. It should above all reconsider the tuition free educational system introduced by Rochas and upgrade the standard of both Government and Private schools as well.

4. The Governor should treat with ignominy distractive things, schemes and plots; and concentrate on his administration to ensure efficient and maximum delivery. He should avoid projects that are not necessary or be misled to projects which non feasibility would tarnish the image of his administration.

5. As long as what is possible is not done, duty has not been fulfilled. The state chief executive should endeavour to exhaust all the possibilities in his administration, having routine reviews with his sectoral advisers (agencies, commissions and ministries) and seeing that what is resolved in each sector is implemented urgently.

7. Leadership positions are for service and servant leadership demands creativity, prudence, discipline, self-control, a listening ear and a sensitive heart-reaction. The Governor should thus ensure that his co-leaders in the various offices, ministries, commissions and agencies imbibe these orientation principles in their administration, and give zero tolerance to any form of corruption from his administrators.

8. Imo governor come 2019, should be an absolute master of details. A master fails when he is not able to organize things. He has to assure that his orders are followed to details. Detailed attention ensures non-negligence, concentration and proper execution of projects.

9. Obedience to tilting by a leader determines the degree of God’s blessings and favours on his leadership and jurisdiction. Since the governor is determined to succeed, he should give absolute attention to the dynamo that tilts his hot condition to political freedom, from freedom to survival, from survival to stability and from stability to success; so that from success he attends the apex significance.

10. Revenge biblically, is a divine function of the God who admonished that humans forgive. He despite all odds has to forgive his detractors as a good father would and devise a forum to accommodate them. This entails non-vindictiveness, justice and fairness, and the habit of doing more than paid for.

I wish you happy and smooth sail in 2019 tenure!