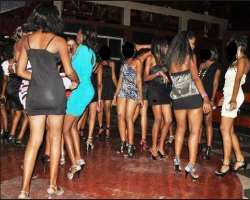 The Weija District Command of the Ghana Police Service has arrested 41 Nigerian prostitutes, as well as 14 male clients.

According to online Ghanian newspaper, ghanaweb.com, the prostitutes were arrested around a place called Choice, where several pubs operate at night.

Chief Inspector Diana Tei Eninful, who led the arrest, said the police had received several reports from residents of the area about the nuisance activities of the prostitutes.

The residents also lamented that the prostitutes had turned the vicinity into a haven for drug peddlers and armed robbers.

Based on the complaints, Eninful said the the police laid surveillance and subsequently arrested 41 prostitutes, most of whom were between 18 and 25 years.

She said the prostitutes sometimes intentionally hoot at and accuse passersby of refusing to pay them after allegedly having enjoyed their coital services, and so pounce on such clients with the help of their gangs of pimps – a situation she said had brought insecurity to the whole neighbourhood.

The report added that 14 male clients were arrested alongside the prostitutes by the police for allegedly soliciting.