Pastor, others arrested for raping minors 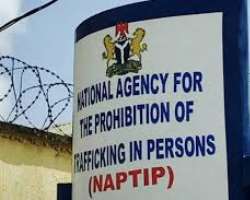 The National Agency for the Prohibition of Trafficking in Persons (NAPTIP) says it has arrested a 43-year-old pastor and two others for allegedly raping minors in Abuja.

The NAPTIP Director of Investigation and Monitoring, Mr Josiah Emerole, disclosed this while addressing a news conference in Abuja on Thursday.

Emerole explained that the pastor, (name withheld), hailed from Ondo state and resided in Dutse Bupma settlement area off Bwari road in Abuja.

He said that the suspect sexually harassed his 17-year-old house help (name withheld) in victim's room and used his hands to fondle her breasts and other sexual genitals.

The director said on one occasion, the suspect allegedly took his sexual harassment to the kitchen where the victims were busy doing dishes.

While in the kitchen, the suspect used his hands to forcefully bring out the victim's breast, fondled them among others illicit interaction with her.

“He subsequently warned her not to utter any word about it to anyone as there would be consequences,” he said.

Emerole said not comfortable with the situation; the victim reported the matter to people.

“Those people reported to NAPTIP and then the agency sent in rapid response squad to apprehend the suspect and he confessed to the crime.”

The director said that the second suspect was a 31-year old man (name withheld) arrested for allegedly raping a 13-year-old girl.

He stated that the suspect allegedly raped the victim severally and finally impregnated her.

According to him, the suspect usually covers the girl's mouth whenever she wanted to shout to seek for help.

He said the suspect would ask her to keep quiet and threatened to stop giving job to her mother as his cook.

According to him, the suspect camped and drugged the victim and sexually violated her for some days.

He stated that all the suspects confessed to the crime and would soon be charged to court as soon as investigation is concluded.

When questioned by journalists, two of the suspects denied the allegation while one confessed, saying that he seduced his victim. (NAN)