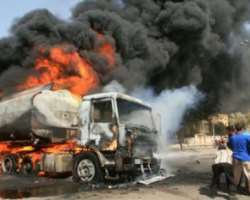 A petrol tanker fire in the early hours of Thursday has destroyed property worth millions along G.U-Ake road, Eliozu, Obio/Akpor Local government Area of the state.

Part of the property destroyed includes a church, a hotel and four shops and a flower garden.

Our correspondent gathered that the tanker which was trying to manoeuvre a bend on the road had fallen into a flower garden along the road and caught fire destroyed a church, Christ Living Miracle Church, a hotel, four shops and the flower garden.

Bumi Grace, General Overseer of the affected the destroyed church journalists that the incident happened around 6 a.m adding that none of their victims was able to save any of their belonging.

Grace said: “When the tanker fell and the fire started, the electricity transformer close caught fire, exploded and the fire spread the more. Before firefighters came the thing has gone far.

“The incident will affect our service, but we must gather to worship God. What was destroyed here is over 300 million because we did not remove anything here.

“I was in the house when I received a call that my church was on fire. I got a vision of a fire incident, and we organized a prayer and fasting. We finished prayers yesterday and this morning this thing happened.”

Also, Amaka Ugu, one of the shop owners disclosed that this is the third time the tanker has fallen on that spot and called on the government for prompt attention.

“What I have lost is over a million naira, but my neighbour lost over 12 million because he just came back from the market. He sells rugs.

“When I woke up somebody called me that another tanker has fallen. This is the third time the tanker is falling here this year. The government has to do something about this.”

Meanwhile, the Commissioner of Works Rivers State, Hon. Dum Dekor described the incident as sad and pathetic adding that the accident was as a result of human error.

“I have not ascertained the product, but from what we can see, it is a petroleum product because that is what can cause this level of damage.

“The incident has also damaged this road. We have lost over 200 meters of this road. The impact is so heavy. The only thing we need to do is that we will ensure that at this bend we will ensure devices are built to make drivers reduce their speed on this roads.

“We will take certain steps to put this to a stop. We are encouraging every user of our road to apply caution. We appeal to those who have lost anything here to remain came while everything will be addressed.”