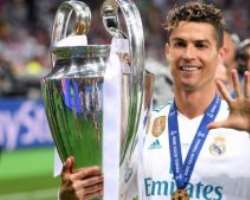 Cristiano Ronaldo can look forward to a return to Old Trafford in the Champions League this season after his new team Juventus came out in the same group as Manchester United in Thursday's draw in Monaco. FULL DRAW

Cristiano Ronaldo can look forward to a return to Old Trafford in the Champions League this season after his new team Juventus came out in the same group as Manchester United in Thursday's draw in Monaco.

Ronaldo, who was not in Monaco despite being nominated for an individual award, spent six years at United, winning the Champions League in 2008, before moving to Real Madrid in 2009.

He will come up against his compatriot Jose Mourinho, under whom he played during his time at Real, while United midfielder Paul Pogba can also look forward to facing his old team.

While those sides will be favourites to progress to the last 16 from Group H, they will have to be wary of Valencia, with the Spaniards returning to the group stage for the first time in three years.

Swiss champions Young Boys, group-stage debutants, look to be the makeweights in the section.

“It's a manageable group, but it all depends on us. Our destiny is in our own hands,” said Juve CEO Giuseppe Marotta.

KLOPP FACES TUCHEL
Thursday's draw ceremony at Monaco's Grimaldi Forum, a stone's throw from the Mediterranean Sea, threw up several other fascinating groups, with last season's beaten finalists Liverpool set to have their work cut out alongside the Paris Saint-Germain of Neymar and Kylian Mbappe, as well as Napoli, in Group C.

The groups. Source:AFP
A meeting between Liverpool and PSG means a confrontation between two German coaches, Jurgen Klopp and his successor at Borussia Dortmund, Thomas Tuchel.

Carlo Ancelotti, who became coach of Napoli in the close season, will return to the French capital, where he led PSG to the title in 2013. That group is completed by a famous old name in 1991 European Cup winners Red Star Belgrade.

“We want to defend our title for one more year,” Emilio Butragueno, Real's Director of Institutional Relations, told Spanish television.

SPURS, INTER MEET AGAIN
In contrast, Barcelona and Tottenham Hotspur will play each other in a testing Group B along with Inter Milan and PSV Eindhoven, the 1988 European Cup winners.

Inter are returning to the competition for the first time in seven seasons. They were in the same group as Tottenham in 2010/11, with the Italians memorably winning 4-3 at San Siro despite Gareth Bale scoring a hat-trick.

“You want to test yourselves against the best players in the world, but we don't want to just test ourselves, we want to compete against them. That's definitely the case with Barcelona,” Tottenham's Eric Dier told his club's website.

The draw looks kind to Pep Guardiola's Manchester City as they look to win the trophy for the first time.

They will face group-stage debutants Hoffenheim as well as Lyon and Shakhtar Donetsk, coming up against the latter for the second year running.

The draw was also kind on German champions Bayern Munich, although they will meet two great European names in Benfica and Ajax. But it was less so for another German club, with Dortmund coming up against Monaco and Atletico Madrid in Group A, along with Club Brugge.

Having won the Europa League last year, three-time finalists Atletico are hoping to go all the way in this competition, with the final to be played at their own Wanda Metropolitano stadium on June 1, 2019.

Changes brought in for this season mean half of the clubs in the group stage were allocated to the top four sides in the four best-ranked leagues: Spain, England, Germany and Italy.

It is becoming ever harder for clubs from elsewhere to compete, but this draw ensures there will be some variety on into the knockout rounds, not least with Lokomotiv Moscow, Porto and Galatasaray joining Bundesliga side Schalke in Group D.

The complete draw for the 2018/19 UEFA Champions League group stage, made in Monaco on Thursday:

– First round of matches on September 18 and 19