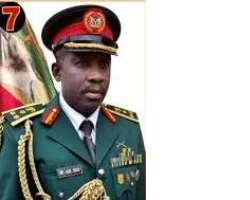 The Acting General Officer Commanding (GOC) 7 Division Brigadier General Abdulmalik Bulama Biu has visited Gajigana, Forward Operation Base of Operation LAFIYA DOLE in Borno State with a charge to the troops to maintain maximum alertness at all times.

He gave the charge during his operational visit to Gajigana where he addressed the troops after a tour of the FOB.

Colonel Kingsley Samuel, the Deputy Director, Army Public Relations, NA 7 Division in a statement Wednesday said he also commended the troops for their commitment in combating the Boko Haram Terrorists.

The GOC however expressed delight on their state of readiness and high motivation. He therefore urged them not to drop their guards and remain vigilant and resilience at all times.

He further stated that the Army was aware of their challenges and assured the troops of necessary support, commending the efforts of the Chief of Army Staff, Lieutenant General Tukur Yusufu Buratai in catering for their welfare.

General Bulama Biu charged them to ensure that the Boko Haram Terrorists are routed out from the Nigerian territory.