Uduaghan within his human right to defect -: HURIWA 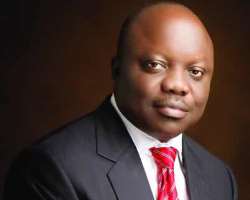 Displeased with the scale of apparently sponsored attacks targeting immediate past governor of Delta State Dr. Emmanuel Udughan over his decision to defect from Peoples’ Democratic Party (PDP) to All Progressives Congress (APC), a Rights group has stoutly defended the erstwhile chief executive of the oil rich Delta State on his political choices.

Speaking with the media in Abuja, the national coordinator of the prominent Non-governmental organization – HUMAN RIGHTS WRITERS ASSOCIATION OF NIGERIA (HURIWA) Comrade Emmanuel Onwubiko cautioned against straight jacketed and politically motivated diatribe directed at the person of former Delta State governor by those who oppose his decision to move to All Progressives Congress.

“From the benefit of overwhelming hindsight, our members in Delta State have called to inform us that the leadership of the former governor’s former party may have inadvertently pushed Dr. Emmanuel Uduaghan out of his former political party because of the alleged plot by the current governor to reward all serving national assembly members with automatic return tickets irrespective of how abysmal their perfprmances over the past three years have been. Emmanuel Uduaghan can not be compelled to remain in a party that ay the Delta state level has failed to institutionalise internal democracy when he has the vocation and the call to represent his good people in the Senate of the federal republic of Nigeria in the next dispensation and with primary election just by the side i wonder what else his critics want him to do. As a civil society group we don't subscribe to some of the achievements he ascribed to the current government because we are aware that poverty has ballooned out of control, but we will defend the human right of Emmanuel Uduaghan to make his political choices.”

“As a human rights group working to ensure that the frontiers of the exercise of the fundamental political freedoms including freedom of association are expanded, promoted, nurtured and protected, we are of the considered opinion that the decision of Delta State governor to move to another political platform to seek to gain the mandate of his people to offer them qualitative and people oriented representation in the senate is well within the purview of his constitutional right to stand for elective position to achieve his well-grounded political ambition which is legally permissible. We therefore think that those criticizing him may need to give him a hearing chance and to accept his very profound reasons in good conscience unlike serving senators or office holders, Dr. Uduaghan to the best of our knowledge is only a private citizen who has the zeal to run for an elective position under the platform of his new political family. So what is wrong with a private individual who is shut out in his party due to lack of internal democracy, moving to another party?”

HURIWA recalled that Article 20 of universal declarations of Human Rights stated thus: “Everyone has the right to freedom of peaceful assembly and association; No one may be compelled to belong to an association.”

HURIWA recalled that Section 40 of the Nigerian Constitution stated: “Every person shall be entitled to assemble freely and associate with other persons, and in particular he may form or belong to any political party, trade union or any other association for the protection of his interests.”

Uduaghan in a statement made available to our correspondent on Wednesday morning and titled ‘Moving On To The Bigger Playing Field’, the former governor noted that despite Buhari inability to score the required 25 per cent in the 2015 election in the region, he has given direct focus to the development of the region.

The former governor stated that having played key role in the cessation of hostilities in the once restive region particularly risking his life for the returned of peace while serving as governor, he would support any government doing it best to solve the myriad of problems confronting the region.