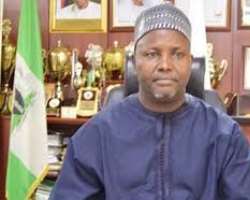 A Civil Society Organization, Centre for Public Accountability (CPA), has dragged the Executive Secretary of the Tertiary Education Trust Fund (TETfund) Dr. Abdullahi Baffa, to the Economic and Financial Crimes Commission EFCC, over allegations of abuse of office and cases of contract deemed improperly awarded by the TETfund Chief Executive.

The group led by its Executive Director, Comrade Olufemi Lawson, in a petition submitted today at the Lagos Office of the EFCC, said “It is with a deep sense of responsibility, that the Centre for Public Accountability (CPA), find it compelling to lodge a formal complaint, for investigative activities, of the Abuse of Office and arbitrary award of Contract, against laid down principles and law, by the Executive Secretary of the Tertiary Education Trust Fund, Dr. Abdullahi Baffa, since assumption of Office, till date.”

The group accused Dr. Baffa of violating several provisions of the laws, guiding the operation ofTETFund, among which stipulated, that TETfund shall ensure that funds generated from education tax are utilized to improve the quality of education in Nigeria WITHOUT DIRECT CONTRACT AWARDING.

CPA also accused the TETfund Boss, of issuing instruction to public owned universities to reserve 20% of all contracts on the intervention fund provided to them by TETFund for “stakeholders”.

“We strongly believe that these “Stakeholders” are none other than Dr. Abdullahi Baffa himself, his cronies and immediate family, many of who he has used as fronts, in executing the numerous illegal contract being awarded to several Higher institutions in clear violation of laid down procedures.” the petition further stated.

“We are worried, that rather than focusing on the primary objective of the establishment of the fund, Dr. Baffa has converted the agency to a market of political patronage and contract bazzar, to the extent that many intervention projects are no longer advertised as stipulated by law. Indeed, what Dr. Abdullahi Baffa has been engaging in, contrary to the spirit and letter of the anti-corruption war of the President Muhammadu Buhari’s administration. It is disheartening that Dr. Baffa is working in opposite direction to the cardinal policy thrust of Mr. President by promoting abuse of Office and corruption, in such a sensitive organization.”

The group called for the thorough and credible investigation of the allegation by the anti-graft body without minding whose ox was gored.

The petition, which was received in the Abuja office of the anti-graft agency on Tuesday, was also forwarded to President Muhammadu Buhari, Honorable Minister of Education, Honorable Minister of Justice and Attorney General of the Federation, Chairman, Senate Committee on Tertiary Institutions, His House of Representatives counterpart, Manufacturers Association of Nigeria (MAN), Bankers Committee of Nigeria and the Federal Inland Revenue Services FIRS.