2019: Delta APC Vows To Sack Okowa As Former Revenue Board Chairman Declares For House Of Reps 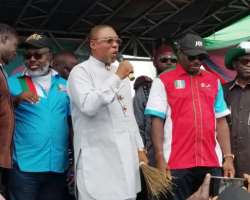 The Delta state chapter of the All Progressives Congress, (APC), has vowed to sack the incumbent governor of the state, Mr. Ifeanyi Okowa, come 2019, describing his administration as the worst thing that has ever happened to Delta and Deltans since the creation of the state.

Speaking to a mammoth crowd Saturday, at Oleh, headquarters of Isoko South local government area of the state during the formal declaration of the former chairman, Delta State Board of Internal Revenue, (DBIR), Mr. Joel-Onowakpo Thomas, for the House of Representatives, Isoko Federal Constituency in the forthcoming 2019 general elections, the state APC chairman, Mr. Jones Ode Erue, stated that, Deltans have made up their minds to send Okowa packing.

“Governor Okowa will be shown the way out from the government house by Deltans because the people have concluded to enthroned an APC government come 2019 in Delta state. PDP has nothing to offer Deltans anymore. Deltans are tired and have rejected the PDP led government of Ifeanyi Okowa.

“With the mammoth crowd I see here today, its work over for APC in Isoko and government house come 2019. Hon. Joel-Onowakpo Thomas has come to liberate the good people of Isoko federal constituency from the sixteen years of slavery in the hands of PDP in the federal House of Representatives. We must all give our full supports to Joel Onowakpo for a total freedom”, Erue said.

In his good will message, an APC chieftain in Isoko, Mr. Williams Omoviro, stated that the people of Ozoro kingdom are tired of the Minority Leader and current member representing Isoko federal constituency in the House of Representatives, Mr. Leo Ogor, saying “I am an Ozoro man like Hon. Leo Ogor, I can tell you authoritatively that we are tired of Leo, he has nothing to offer for the sixteen years. Let's all give our supports to Hon. Joel-Onowakpo Thomas for a total liberation”.

In his declaration speech, the APC Isoko federal Constituency House of Representatives aspirant, and former chairman, Delta State Board of Internal Revenue, (DBIR), Mr. Joel-Onowakpo Thomas, stated that his interest for vying for House of Representatives for the Isoko federal constituency was to for total emancipation of the Isoko nation that has been enslaved for good sixteen years.

Mr. Joel-Onowakpo, noted that he has an abiding faith in the good people of Isoko, that they would choose right come February 2019 general election saying that God willing "we shall prevail”.

The aspirant who is presently the Coordinator of Federal Inland Revenue Service, (FIRS), for Edo, Delta and Rivers states, hinted, “My fellow Isoko people fear not because the head of the snake has been cut off and only struggling to survive. Give me your supports and Isoko will never remain again in this slavery and hardship. The uninformed will hardly know that I have been involved in the political engineering of this nation since the day of Action for Democracy, (AD).

“In my avowed determination to continue to contribute my quota of national development, I joined the PDP where I played active roles in building the party to enviable height culminating into my appointment as chairman of the Board of Interval Revenue, Delta State, before I finally decided to call it quits with PDP when all my entreaties against the misrule of the state and my beloved Isoko nation fell on deaf ears.

“My achievements during the time are manifest even my critics, (if any) in their quite movement will give me an A+, this performance I dare say was what President Muhammadu Buhari, saw and appointed me the Revenue Coordinator for five states. Therefore the declaration I am making today as a formal member of the APC is a reaffirmation of my resolve to stand against all forms of impurity that has severally manifested by the present administration.

“I have after due consultation, decided to formally declare to the Isoko people this day, 25th August, 2018. Here and now, that I am running for the nomination as a candidate, to fly the flag of the APC in 2019 general election as member representing Isoko nation at the Federal House of Representatives, and put to an end the current drift towards the enthronement or a political dynasty which is alien to the Isoko people”.